So we took some time to see a bit more of Sarasota. We toured the Ringling Museum/Ca’ d’Zan Mansion (Ringling’s winter home), which was amazing, and wandered through the beautiful Marie-Selby Botanical Gardens. The gardens are set right on the bay and include mangroves, huge banyan trees, and a large hothouse with all kinds of tropical plants and flowers.

We also took a long dinghy ride (after Paula cleaned it up) through a canal along the shore of the bay with mangrove islands filled with birds on one side, multi-million dollar homes and boats on the other, and fish jumping in the middle.

The rest of our time we worked on the list, getting things ready for our departure when we return to the boat in late-July, right after Paula’s birthday.  Sarasota is a nice place; we have just been here too long!

This is where you quit, unless you want more details!

6-16 We had planned to fly Phoenix – Charlotte – Sarasota, but the Sarasota flights were full so we flew to Tampa, rented a car and once again drove the hour south to the boat. Long day!

6-17 The guys arrived around 9:00 AM to remove the broken window, a little “2-hour” job. Well, 4 hours later (with Tom helping a good part of the time), out came the window…in pieces! Seems whoever replaced it the last time used 5200 to seal the window and frame, a sealant that seals very well but is very hard to remove. They actually used the blunt end of a hammer to get the window out. After taping plastic over the hole so we weren’t air-conditioning the world, they were off, saying they would be back Friday to replace the window.

We took the scooter down so we could finish the mounting system and so Paula could practice her new scooter driving skills (after taking a skills safety class in Phoenix to get our licenses). 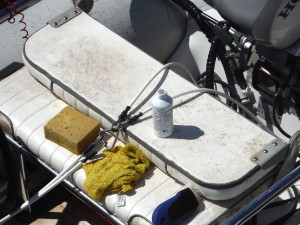 We also took the dinghy down and Paula gave it a good cleaning. (It looks so much better.) Then we took a long dinghy ride along the shoreline. There is a 30’ wide canal between the shore and a series of mangrove islands. Some of the houses along the canal are huge, not to mention some of the boats. These people live in a different world than we do with our 30-year-old boat. On the way back, we got out in the open bay and took the dinghy up on plane. It will really get up and scoot! But there were also place where Tom had to get out and pull the dinghy over the shoals. 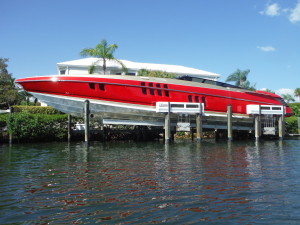 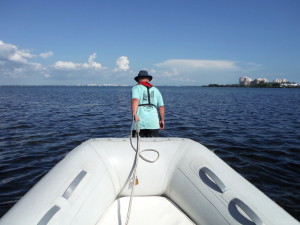 6-18 We worked on the scooter rack some more and then got a call letting us know the window would not be ready until Monday or Tuesday. This put a real kink in our travel plans as Paula needed to be back to work before we would have time to move the boat to Ft. Myers. So, disappointedly, we reserved the slip for another month with plans to move in late July. But we will then have to not only get to Ft. Myers, but across the state to Stuart where the bimini is scheduled to be replaced in mid-August. Oh well, as they say one of the most dangerous things to have on a boat is a schedule.

So we headed out to do some sightseeing. We visited the beautiful Marie-Selby Botanical Gardens. The grounds are right on the bay and include everything from tropical to desert plants. The hothouse had dozens of plants in bloom and they have one of the biggest banyan trees we have seen. 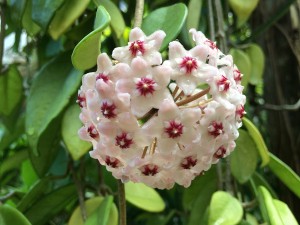 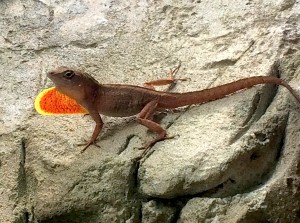 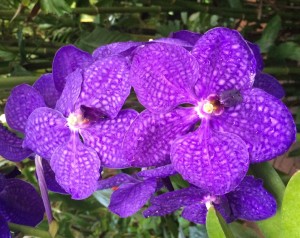 The afternoon was spent at the Ringling Museum/Ca’ d’Zan Mansion. The museum covers the history of the circus along with lots of memorabilia. It also has an amazing one-quarter inch scale circus model which is huge and has phenomenal detail. The mansion was the Ringling’s winter home and was right up there with the Hearst Castle in opulence, except not as big.

The Ringlings were art collectors, and made a trip to Europe every year to buy art. Part of their collection is in a large art museum on the grounds as well, which includes a large number of pieces by Rubens. 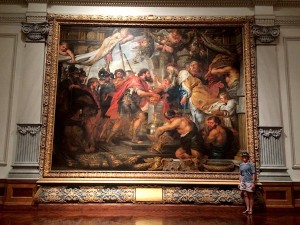 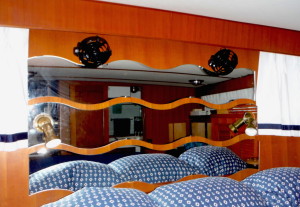 6-19 Major project was rehanging the mirror headboard in the main stateroom. Plan B was much more successful the Plan A (see last post), and it looks good.

6-20 Tom serviced the A/C units and cleaned the oven, which had not been used since we bought the boat. Paula went to the yarn shop and knitted for a while.

6-21 After church, Paula hopped on a flight to Greensboro to surprise her dad for Father’s Day. She actually called him from outside their apartment and then knocked on the door while she was talking to him. They enjoyed the surprise.  She spent the night, then back to the boat on Monday.

While she was gone, Tom fixed the leak in the forward head seawater supply line. (Better the input line than the output!)

6-22 Tom spent the morning doing some general maintenance on the boat, including cleaning the sea strainers (which filters sea water to the engines and A/C for cooling). He also serviced the batteries, but found a bit of a problem. While he was filling one cell he noticed the fluid in the next cell was rising as well…not good! Long story, but after doing some testing and talking to Hank, a DeFever electrical “expert” (thanks Hank!), he determined the batteries were on their last legs and needed to be replaced. Buying batteries is like buying most things; you can find a wide range of prices for the very same battery. Hank told him about Treasure Coast Batteries in Stuart, which just happens to be where we are headed and the really good thing is they will install them for you for next to nothing. That’s 8 70-pound batteries we don’t have to carry down into the boat, lift up and over the engines, then remove the old ones. That clinched the deal; now all we need to do is get to Stuart.

6-23 Paula started working on the mattress covers for the V-berth, which had to be custom-made due to the “V” shape. When she took the material out of the laundry room, she found that there was a leak in the deck just above which had dripped and discolored the material. So she was off to the marina’s laundry room while Tom went searching for the leak. Turns out the scupper (small outlet on the deck to let water out) had a finger-sized hole in it. So out came the fiberglass supplies for Tom’s first solo attempt at patching fiberglass.

Tom also spent a couple of hours drawing an electrical diagram of the battery systems. Electrical systems are not his strong point, so it was helpful as a learning exercise and hopefully for troubleshooting later.

6-24 More projects off the list today and a second coat of fiberglass on the scupper. Also got things better organized and you can actually see the V-berth now. 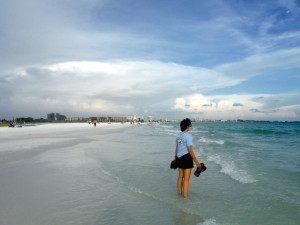 6-25 Bud arrived (the guy from whom we are renting our slip and also the guy who came on a river trip a few years ago and reawakened this Great Loop dream of ours) and we spent some time chatting with him, then went out to run some errands and pick up supplies. We ate “The World’s Best Clam Chowder” in Siesta Key, followed by a long walk on the beach. The sand is so fine they call it “sugar sand.”

6-26 Paula left after breakfast. After she left, Tom took the opportunity to make a mess and cut a hole in the forward bulkhead to install the stereo. Though he ended up with sawdust all over, the stereo is now tucked into a cavity neatly below the chart drawer. He ordered the teak for the trim to assemble at home and install on his next trip. He even ran wires down to the engine room so he now has speakers there too. One more thing off the list!

That evening he joined Bud and Ziggy, and airline pilot who lives on a boat in the marina, for a seafood dinner at the Dry Dock.

6-27 Tom put the dinghy and the scooter back on the boat to prep for leaving. The dinghy had been in the water for less than a week and already had a coat of growth covering the entire bottom. Unfortunately, the warm FL water allows “sugar coral” to grow very rapidly all over and in everything and bottoms must be cleaned often.

6-28 Bud left his slip in the morning to put his boat in an air-conditioned hurricane-secure facility near Lake Okeechobee, after which Tom, with the help of a couple of dock hands, moved Life’s TraVails to Bud’s newly-vacated slip. This was his first single-handling of the boat, and although it wasn’t real pretty, he made it without hurting anything. The rest of the day was spent cleaning the boat, inside and out, and re-gluing the liner on the pantry shelving.

6-29 Tom was cleaning up to go home when all of a sudden the power went out. He found a tripped circuit breaker on the dock, which seemed to fix it. But then it tripped again with about 5 minutes before he was to leave. He reset it and headed for the airport, praying it would hold.

He got the last seat on both of his return flights, but made it home as scheduled.

We are looking forward to finally moving the boat in late July.