Home About Us Buying a Boat 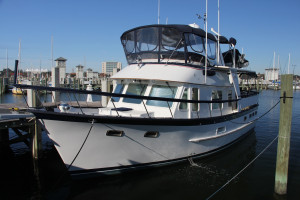 Now that Tom thought he had found the boat, the next step was for Paula to see it. The owner was gracious enough to allow us to spend a couple of days on the boat…by ourselves on January 15, 2014. Our stay reinforced my initial thought – we had found our boat.

After we returned home, a short conversation with the owner resulted in a price agreeable to both of us, and we were on our way. We signed the purchase agreement on January 27, 2014  contingent on a survey and sea trial, which was the next step. Finding a surveyor was a project, partly due to the timing. The week we wanted to do it turned out to be the National Surveyors Association annual meeting, which made most of them unavailable for the week. And finding one we felt would do the job we wanted was as much of a problem as the convention. For example, one guy I talked with, in response to sending him a picture of the stuffing box, told me he would not even look at the engine or any of the running gear – he didn’t get the job. 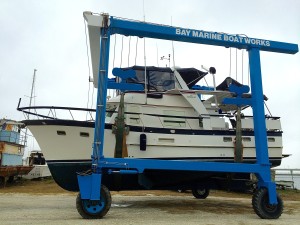 I finally found a guy from a reference through the DeFever Forum. And while I think he did a good job, he was late to every appointment, one of them by 24 hours. The survey and sea trial came us with a number of issues, only one of which was major. The cutlass bearings on one side needed replacing, which turned into a bit of a project. For details, click here.  The sea trial was finally completed on January 20, 2014.

Now it was just a matter of the paperwork. Normally a good deal of this is done, or at least directed by, the broker. But since we did not use one, there was bit more paperwork, but in the end it was not that much. One of the main items was to get an Abstract of Title form the Coast Guard to insure the boat has a clean title. The boat and the dinghy were already owned by a single-member Delaware LLC, so it was a simple matter of buying the LLC. And there were a number of filings to be made like the Coast Guard documentation, the MMIS, and the EPIRB. An additional advantage of the Delaware LLC was the lack of sales tax.

One of the biggest hassles was the insurance. Before we finalized the deal, we had created a budget for the boat, knowing it would likely be off. We had used the cost of insurance based on what the prior owner was paying. But things had changed since he got the policy, and the quote we got was more than double. I got quotes from half a dozen companies, all in the same range, and there were another half dozen who would not insure us either due to the location of the boat, or our experience level. But the prior owner came up with the idea of just transferring the insurance into my name since it was insured through the LLC. One letter to the insurance company and done…no price change. Praise God!

Although it took us several years to find our boat, the actual purchase process was not all that bad.

Then came the task of making her our boat! Some of those tasks are listed under the Projects tab on our home page.