Home About Us Our Dream 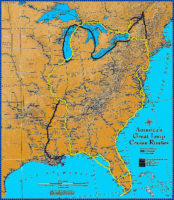 The yellow line represents our route (click to enlarge)

Paula grew up in NC and sometimes vacationed in Myrtle Beach, SC. She always dreamed (while sitting in restaurants with big picture windows) of boating on the Intercoastal Waterway, a waterway running along the eastern seaboard. Back in his 20s, Tom had read a book about a guy who traveled the entire length of the Mississippi River, beginning in a kayak, then moving to bigger vessels as he made his way south.  This became one of the big dreams on Tom’s bucket list.

After we married, we discovered these joint dreams and that they could be combined. The Great Loop connects the Intercoastal Waterway with the Erie Canal, the Great Lakes, Illinois River, Mississippi River, Ohio River, the Tennessee-Tom waterway down and across the gulf back to the Intercoastal, a 5000-mile loop.  In a boat that moves along at a whopping 8 knots, if we motored 8 hours per day, it would take about 2½ months to do the loop.  So we figured it would take us at least a year if we did it straight through, or several years if Paula continued working part-time and we did it in sections.

In the late ‘90s, when we were still living in NC, we had actually started boat-shopping, but never found the “right” boat. Then Paula got the job at America West, and we moved to AZ. So, living in the desert, the dream got put on the back burner for about 15 years.

Then in 2011, Bud, who owned a trawler, came on a river trip with Tom and conversations between them revived the dream.  After the trip, Bud sent us information on the Loop including, Honey, Let’s Buy a Boat, a book written by a couple who bought a boat to do the loop, much like our dream. So…we actively started boat-shopping again.

Though most of our previous boating experience had been in sailboats, it was not the right boat for this journey.  We started looking for a twin-engine trawler with 2 staterooms, 2 heads, a flybridge with an upper helm (plus a helm in the main salon), and an open aft deck.  We even developed a list of things we wanted on a boat, like an enclosed flybridge.

In early 2014, we found our dream boat, a DeFever 44 off-shore cruiser in Mississippi, and named her Life’s TraVails.  We began our first Loop in November of that year and completed it exactly 2 years later.   We loved it so much, especially Canada, we embarked on our second Loop to Canada, this time returning via the East Coast back to the Keys. where we weathered COVID.  In November of 2020, we sold Life’s TraVail, ending our East Coast boating adventures. The next dream became boating the Pacific Northwest. (See our blog, Beginning of a New Season, for that story.)