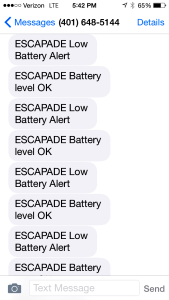 7/5-8/2015  Summary:  For several days we had been getting messages from the alarm system on the boat that the batteries were low and the temperature in the boat was high. We called the marina and they found a circuit breaker blown and moved us to a different power source.  We still had alerts so on Sunday morning, Tom took an unplanned trip to check it out.

Once he got there, he isolated the problem to the power pedestal on the dock. He plugged into another one, and bingo…no more problems. Although it took some convincing, the marina agreed to replace the circuit breakers.

Meanwhile, he surveyed the damage in the refrigerators and freezer. For the most part, both frigs were a total loss other than a couple of canned goods. The freezer was in better shape with only a few losses. Overall, considering what it could have been, it was not all that bad.

When Tom arrived on the boat he also found that the leak in the main stateroom (our bedroom) was back.  Once he removed some of the caulking along the deck above, he found an old patch which was not holding, along with another area which was an obvious leak.  At it turned out, the scupper he fixed on the last trip, while a problem, was not the problem. 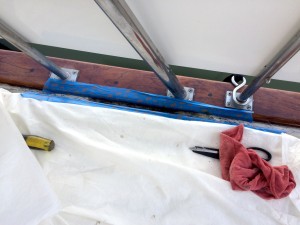 After much scrapping out of the old caulk and patch material along a 6 foot stretch, and pumping in a considerable amount of Captain Tolley’s Creeping Crack Cure, out came the fiberglass repair kit again to replace the 18 inch patch.  Unfortunately after the fiberglass was in place, it began to rain. Since he was leaving in the morning, all he could do was cover it and pray it would set between before we return later this month.

So then it was just clean up and get ready to fly home in the morning.  Well that didn’t go as planned either – all the flights were full out of Sarasota. But…that turned out to be a blessing from God.  Back at the boat, while  finishing up a couple of small projects on the boat, the power went out again! This time, it turned out the entire marina was without power; actually, the entire island! The power outage lasted in total around 11 hours, but Tom ran the generator, keeping the A/C running and the food cold.