Home Our Blog 5 days in Sarasota

5/18-23/2015  Summary:  Our time on the boat was a combination of work and play. We flew into Tampa and drove down, getting there in time for an early night.  The big task of the trip was rerouting the TV wiring, but praise God, it worked first time!  We didn’t move the boat this trip, but just enjoyed the Sarasota area. 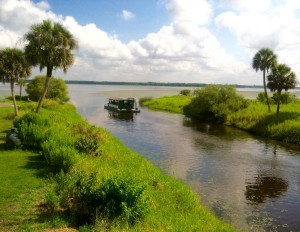 Sarasota has an Amish community and we enjoyed the fruits of their hands. (Think delicious homemade pies, and beautiful quilts.)  We also got to hike a little in Myakka River State Park and took a ride on the “world’s largest covered air boat” on Upper Myakka Lake.   Tom enjoyed  seeing about 20 alligators as well as a variety of shore birds during the boat tour.  Alligators aren’t Paula’s favorite.

Paula found a great yarn shop and Tom fixed a leak in the engine room.  We had an early morning encounter with a manatee and although we didn’t make it to the Ringling Museum, hopefully we’ll get there next time we return.

Our return home was by way of NC to spend 2 days with Paula’s parents.

This is where you quit, unless you want more details!

5-18 – We flew from Phoenix to Tampa in order to stop at Ikea to replace the broken mirror for the stateroom headboard. (See last post for details.) Grabbed the mirrors and dinner at Ikea, then drove about an hour south to the boat.

All was well at the boat…except there seemed to be about a quart of transmission fluid in the drip pan under the port engine. Obviously not a good thing and at first glance it seemed to be the front seal leaking. Another item to add to the list.

5-19 – We slept in before getting started on our “work day.” Got a couple of recommendations for window and transmission repair from the Dock Master (but neither of the transmission repair guys returned our calls). We spent the day working on the list, and knocked out several small items. Found the problem with the forward sump pump was the float switch, but Paula quickly found a replacement online and got free 2-day delivery. 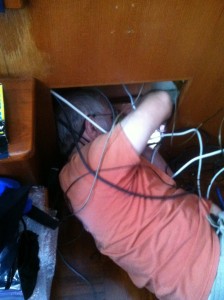 Tom then went after the tangle of wiring involved in moving the TV and stereo. They  included 3 coax cables, 4 speaker wires, a power cable, and 3 or 4 unknown wires no longer needed. The wires had to be rerouted from the starboard side where the entertainment center was previously to the new location on the port side. This meant pulling them up under the console, then up the cable runway on one side of the windshield, across the windshield, down the other side, then fished over to the side wall, all done by removing a series of panels to gain access to the runways. It was time consuming and tedious, but the TV worked on first try (!) and the wiring is ready and waiting for installation of the stereo.

In the midst of the TV project, Tim Smith (Tim Smith Marine Services) came by to give us an estimate on the window replacement (again, the “why” in the last post). Tim was very knowledgeable and obviously capable of doing the window. But in further conversation it turned out he was much more than just “a window guy,” he was a stem to stern fix-it guy. So Tim and Tom descended into the engine room to check out the transmission and figured out the “transmission” fluid in the pan was really diesel fuel. (Red die is added to marine diesel fuel to tell it from highway diesel, making it look like transmission fluid; it costs less because there is no road tax on it, but is not allowed in a road vehicle.) So…no need for a transmission repair guy after all. While in the engine room, Tim was kind enough to look around and give Tom a few suggestions on some preventive maintenance issues, including some products to make the tasks easier. His visit was most helpful.

5-20 – In the morning, we tackled the continuing inventorying project on the flybridge . With the inflatable kayak and related gear stowed under the brow (forward storage on the flybridge), we think we finally have all the large items we want to bring down to the boat. After lunch on the boat, we went out to visit the Amish village on the east side of Sarasota. Paula found a great quilt shop to peruse, we bought a few things at Yoder’s produce market, and then had dinner at Yoder’s restaurant, where we had a great Amish dinner and amazing pie for dessert, vowing to return for more pie next trip. 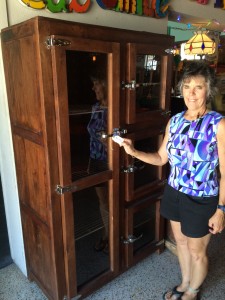 5-21 – At about 4:00 AM, Tom was awakened by a loud “BANG” on the boat.  (Paula slept right through it.) He jumped up thinking something on the flybridge had fallen. He went up to investigate and while looking around on the boat, a manatee slapped the water right next to the boat under the dock. It must have previously hit the boat with its tail! Paula woke up as Tom tried to slip back in bed.

Tom found the diesel leak before breakfast, but needed fuel-grade Teflon tape to make the repair. So we were off to Home Depot and to leave the new mirrors to be cut. Lunch was at Popi’s, a great little restaurant Siri found for us. We will likely return here next time we are in town too and also to visit the highly recommended Butcher Block in same strip mall.

The plan was to spend the afternoon at the Ringling Museum, but that changed when we heard we could go on Mondays for free. So we went treasure hunting at a couple of thrift shops and stopped at the Circus Antique Shop, where Paula fell in love with a $2,500 new-made-to-look-old ice storage cabinet. They had a ton of really cool stuff, but we made it out without buying anything. We made a short stop at the Island Park near Marina Jack’s Marina on the way back to the boat where Tom did a great job grilling a succulent pork loin on the sundeck. 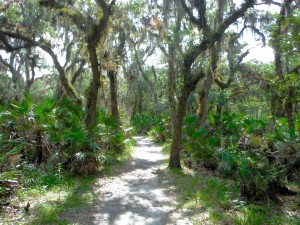 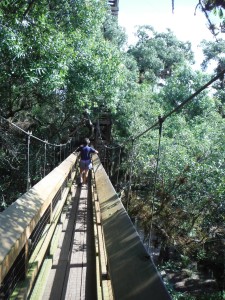 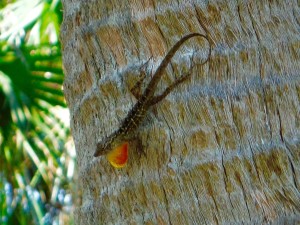 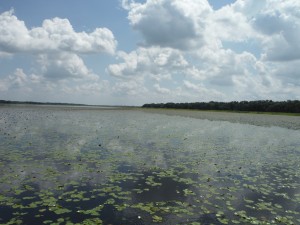 5-22 – We spent most of the day at Myakka River State Park. A hike through the hammock (a wooded area alongside of the river pictured above) and climb up the 75-foot tower merited a great view of the tree canopy from above. We saw lots of cool lizards, a variety of “air plants,” but very few birds. A jet boat tour around the lake was next. We saw about 20 alligators, ranging from 18 inches to over 6 feet and learned lots of cool information about them, including “they are perfectly designed for their environment, have been around for some 20 million years, and have not changed at all over that time.” NOT! After the tour, we walked out on the bird-watching boardwalk where we saw roseate spoonbills, sandhill cranes, and a variety of other shore birds. But we did not stay long as it was almost unbearably hot and humid!

On the way back to the boat, we stopped at A Good Yarn, that has the coolest knitted coral reef (pictured right).  It was one of the nicest yarn shops Paula has ever been visited (and that is saying something). Then we picked up the mirrors on the way back to the boat. Tom installed the new sump pump float switch while Paula did laundry at the marina.

5-23 – We were up at 4:00 AM to make an 8:30 flight out of Tampa to Charlotte, then on to Greensboro to visit Paula’s parents for a few days before returning home.

Thanks for stopping by.  We just made reservations for our return on June 3rd, so the next installment is not too far off.