Home Our Blog Sanding in Stuart

11/18-12/5/2015  Summary:  Once again we headed to the boat with full intentions of moving south. But once again, that was not to be, not because we couldn’t, but because we determined it just didn’t make any sense. As we looked for a marina south where we could leave the boat, we found they were double the cost of our current marina, which is a very nice marina. We were told some people call the area south of us “snob alley.” We know that does not refer to all the people, but it does seem to apply to the marinas. So, we decided to just stay where we were and work on the list. 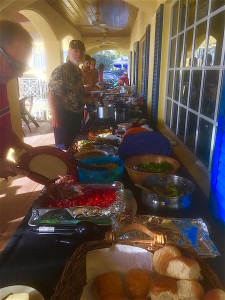 Paula tackled the teak handrails, and Tom went to work on finishing the anchor pulpit. Over the next 12 days, we got the bow rails stripped and 15 coats of varnish laid down, the anchors installed on the new pulpit, and cleaned and brightened the aft teak deck along with a number of other smaller projects.

We had our first “non-boating guests.” The Weatherstone’s kids came for dinner, and they even brought flowers! We had a delightful time with these great representatives of the “younger generation.”

We had Thanksgiving dinner at the marina with 125 of our closest friends. The marina supplied the turkey, stuffing and mashed potatoes, and the “boat people” supplied a ton of side dishes and desserts. It was a great meal, but not really like being with friends at Dion and Debbie’s. We headed home not knowing when we will be returning, but it will probably be a couple of months and we WILL move the boat because the marina is kicking us out!

Details: Tom went to the boat by himself with the plan for Paula to come down 3 days later. Turned out a couple of her flights got canceled so she made it down in 2 days. Tom was working to get the anchor pulpit in place, a requirement before making our planned move south. So while he worked on that, Paula started removing the old varnish from the 64 feet of teak handrail on the bow.

The varnish was in poor shape as we had let it get away from us and was cracked down to the wood in many places. So we determined it needed to be stripped down to the bare wood to start over. Who knows how long the many coats of varnish had been there, but they did not come off without great resistance. Paula used a heat gun, scraped, tried a paint stripper, sanded, and used lots of elbow grease over the course of 4 days before she was down to bare wood and the first new coat was applied. 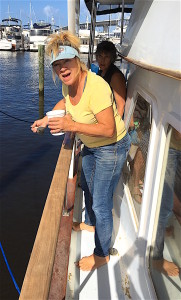 Near the beginning of this project, we saw a gal on another boat applying varnish and Paula went down to talk with her to see if she had any tips, since this was our first go at it. Turned out she wasn’t the owner (as Paula thought) but a professional detailer, having taken care of boats for about 15 years. She came down to our boat and we became fast friends with Diana over the next few days, as she graciously shared suggestions, showed us technique, met us at the nautical supply store to help us buy necessary supplies. When we were going to put off applying the first coat of varnish one more day because we thought we didn’t have time, she was at our boat within 5 minutes of receiving Paula’s text, foam brush in hand, encouraging us to get the first 3 coats on while the weather was good. Then she mixed the varnish, picked up a brush and showed us how to apply the first coat

She was so generous with her time, we bought her a gift card from Home Depot (which she tried to refuse, but admitted she is a hardware store junkie). The last day, we hired her to teach us how to clean the teak on the aft deck, something not even on the list, but WOW did it look great. Now we just have to oil it, and it will be good for another 6 months.

We got to meet 2 of Chuck and Susan Weatherstone’s (friends from NC) kids and son-in law who made the drive down from Vero Beach to have supper with us on the boat. Chuck and Susan, you “done good.” Esther, Zach and Josh are so friendly, super-mature, polite, great conversationalists, and just plain fun. At one point, Josh asked, “So how many have you had on your boat at one time?” to which Tom replied, “3.” The 3 of them were the first to sign our guest book! 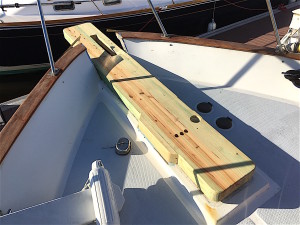 For the most part, the anchor pulpit installation went well, other than the old bolts being too short because the new beam is half an inch thicker than the old one. After several
times of both of us crawling into the small anchor locker and several trips to the hardware store, it was set in place. Tom laid down a full tube of 5200 (caulking) under the beam and bolted it down, only to discover he forgot to run the cables into the winch housing. Once that was done and a sheet of starboard placed on top to protect the beam from the anchor chain, the anchors were hooked up and the job was finally finished. (Well finished until the beam cures and it can be painted, still a couple of months off.)

Steve Schrimsher stopped by to put seam seal on the new flybridge cover and Tom followed it up with another coat a few days later. We also stopped by their shop and saw the new laser system he used to measure our bimini side curtains. It sits on a table that is about 6’ by 20’, with the drawing/cutting device moving across it on rails. Impressive.

Another project was modifying the old flybridge instrument panel canvas cover since with the windshield removed, the old cover was a bit too big. We had taken it home last time so Paula could do some of it on her good sewing machine, but there was still much to do, so she brought the sewing machine to the boat. The most frustrating part was installing the snaps around the perimeter. It took no less that 4 trips to the marine hardware store and the purchase of 3 different tools to get it figured it out…but we finally did and it looks great.

We had originally told the marina we would be leaving on December 1st. When we told them we wanted to stay, they scrambled to find a slip for us. We had to move the boat to the next to the last slip away from the office. We found we did not like the remoteness as very few people walked by to visit and Paula didn’t get the encouragement as she worked diligently on the handrails. But we did get lots of exercise walking back and forth.

At the end of the trip, we flew to Greensboro, NC to celebrate Paula’s parents 70th wedding anniversary. Great party with about 125 folks attending. Congratulations Pat & Nomie!