1/27 – 2/6, 2016  Summary:  We arrived at the boat to several days of rain, then spent a couple of days provisioning and making good use of the rental car, including stopping at 8 thrift shops in one day. (We have become thrift shopaholics). Ate lunch at an amazing new brunch place called the Berry Fresh Café. Tom had the best Monte Cristo he has ever eaten! And our friend Ginger joined us for dinner one night on the boat.

We had some maintenance items to take care of before we left, some of which we were able to get done in the rain, like changing the oil. Once the rain stopped, we re-cleaned, brightened, then oiled the aft teak deck, chairs, table, and swim step. Now they look great! We also got the aft handrails sanded down and Paula got 3 coats of varnish on them. After reassembling some of the final pieces removed for the new flybridge cover, we were ready to go…but the weather was not! We stuck around an additional day for the winds to die down, then on 2/6 we loosed our lines and headed north. We only went as far as Ft. Pierce with lots of dolphins following along. We are still on schedule to make our goal of making it to St. Augustine by the 17th where we will leave the boat and return to Phoenix for a while.

Details: Once we started looking at the list, we saw there were more things to do before leaving Stuart than we had originally thought, so we started to chip away at them. Tom got busy changing oil in the engines (11 gals and 4 filters), replaced engine zincs, checked the batteries, and serviced the strainers, while Paula stripped the aft handrail down to bare wood and began varnishing. On Saturday, Ginger Martin, a river rat friend, joined us for a cool but nice supper on the aft deck. 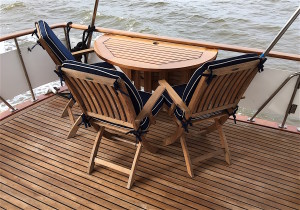 We also re-cleaned and brightened the teak on the aft deck, swim step and other steps because we hadn’t been able to get oil on them the previous time and we felt they needed it again before oiling. This time, Paula applied 2 coats of oil and everything looked so much better! We also did the same to the deck chairs and table legs and what a wonderful difference it made. Worth every hour (~12).

We gratefully accepted the offer from our dock neighbor and borrowed his car to run a few more errands, get some last-minute groceries and discard the used oil. With just the VHS antennas left to mount before we left, we were getting close. By Friday, Feb 5, we were ready to leave, but the wind kept us in Stuart another day, which was sad because we had wanted to get to Ft. Pierce for their First Friday Festival and the large Saturday farmer’s market. Finally…on 2/6 (6 months after having arrived), we left Stuart and motored the short distance to Ft. Pierce, about 4 hours north.

Docking at Ft. Pierce City Marina was very challenging, as very strong current caught the boat and the aft swim step and dock made contact while the marina’s dock hand stood and watched until too late. Tom thinks he can fix it, but it did bend one of the step rails a little. After all that, because of regulations that require new docks to have a GFI on the power source which is very finicky, our power didn’t work. We had to move the boat to their old docks (out of the current with a much less scary docking). Once settled in, we walked around old town just a few blocks from the marina, then to the Pirate Festival in the park next door (with pirate groupies similar to the Renaissance Fair types in Phoenix). At this point, it looked like we would be in Ft. Pierce for just a couple of days.