Home Our Blog The Crossing

3/25 – 4/1/2015  Summary:  We arrived on the boat on the 25th with a list of items to do before we made the crossing from Carrabelle to Clearwater. Tom started on the mechanical list while Paula continued to get things organized, including her new set of dishes.

The weather held us off from crossing on Saturday night as planned, but we headed out of Carrabelle River on Sunday afternoon charting a course for Clearwater. 21 hours later, after seeing seas ranging from almost dead calm to 2.5 to 3 foot swells, we arrived on the west coast of Florida having made one of the two open-ocean crossing necessary on the Great Loop.

Paula went home to prepare for work the afternoon of our arrival, and Tom stayed for a couple more days to get things settled before heading home. The next installment of the adventure will start sometime mid-April, so tune back in then for a report on the next leg.

This is where you quit unless you want more details, so thanks for stopping by! 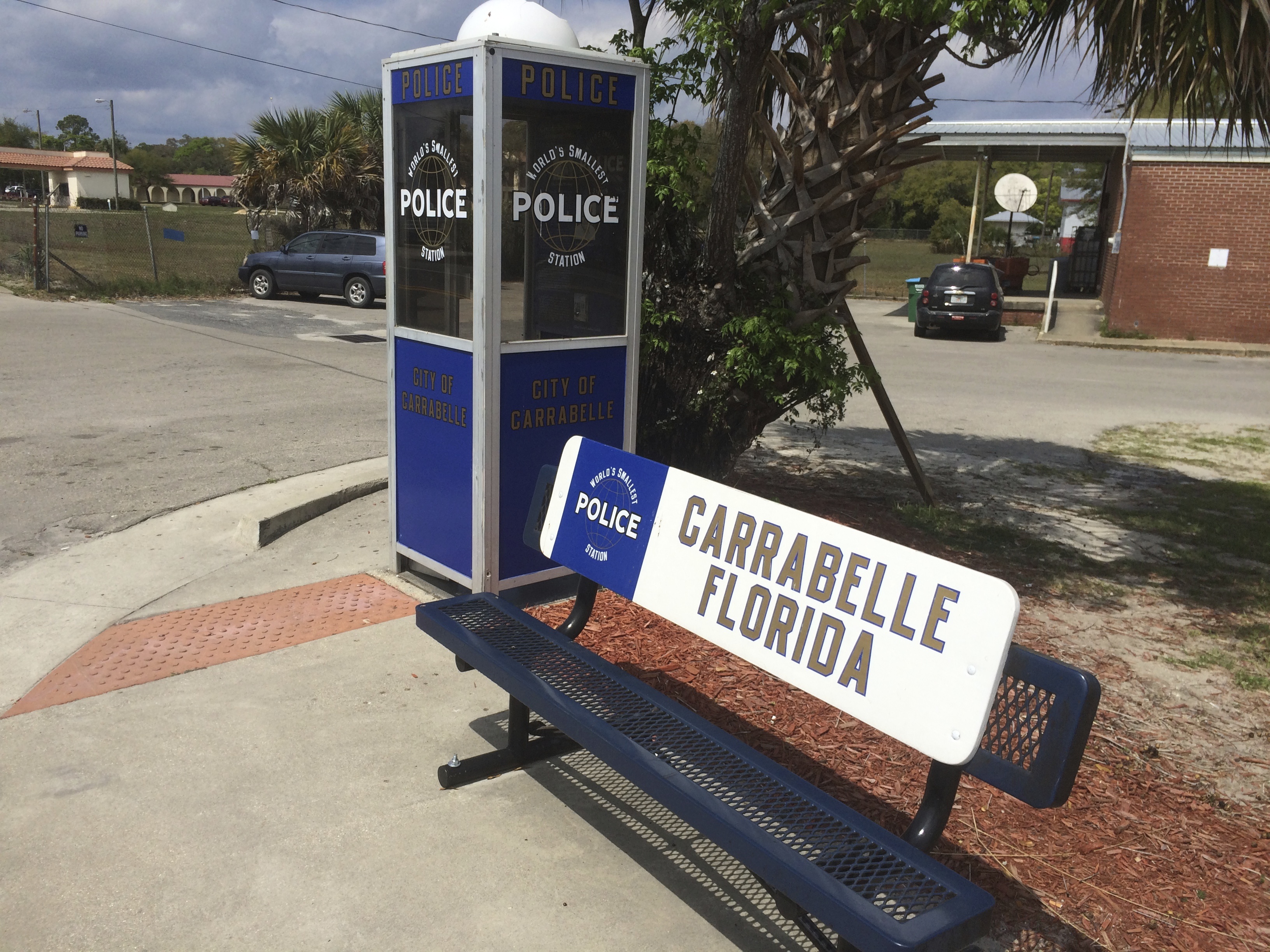 27 – Our trek to the boat took a detour through North Carolina to visit Paula’s parents for a couple of days, arriving at the boat mid-morning on the 25th. Tom went to work on the list, and knocked out a few items that afternoon. The next day, he changed all 14 fuel filters on the engines and generators…yes 14! (They range from an inch in diameter and 2 inches long, to 5 inches in diameter and 16 inches long.)

Eric, the repair guy, brought the parts we had on order and helped Tom install and test the new alternator. By the end of the day most of the serious items were fixed and we were still hoping for a Saturday night crossing from Carrabelle to Clearwater on the west coast of Florida. But the weather forecast did not look good, so we put it off until Sunday.

We walked around Carrabelle a bit and saw the “World’s Smallest Police Station,” a phone booth installed back in the 50’s to house the police phone. (Carrabelle still doesn’t even have a stoplight in “town.”)

3/28 – Saturday morning we were on the sundeck when 2 guys came by. Turned out they were on the boat next to us, a 40 ft. Mainship named Blue Ghost II. They wanted to know if we were crossing and when. After some conversation, we decided to cross together…there is safety in numbers.

We continued on the list and made a good dent in it. By this time, we were down to the “2nd tier” items, like checking the battery water and changing A/C filters. While getting our course into the chart plotter (an instrument that displays a chart showing our route and where we are, displays a radar image for a 24-mile circle around the boat, gives speed and water depth, and controls the autopilot), we found that our two compasses disagreed by 30 degrees. Another item for the list!

On Saturday night, we went to dinner at Fathoms, Eric’s wife’s restaurant right on the water. It is actually in the building which was once Eric’s repair shop before he moved directly across the river. Paula splurged with crab legs and Tom had one of the best grouper dinners he has ever had. 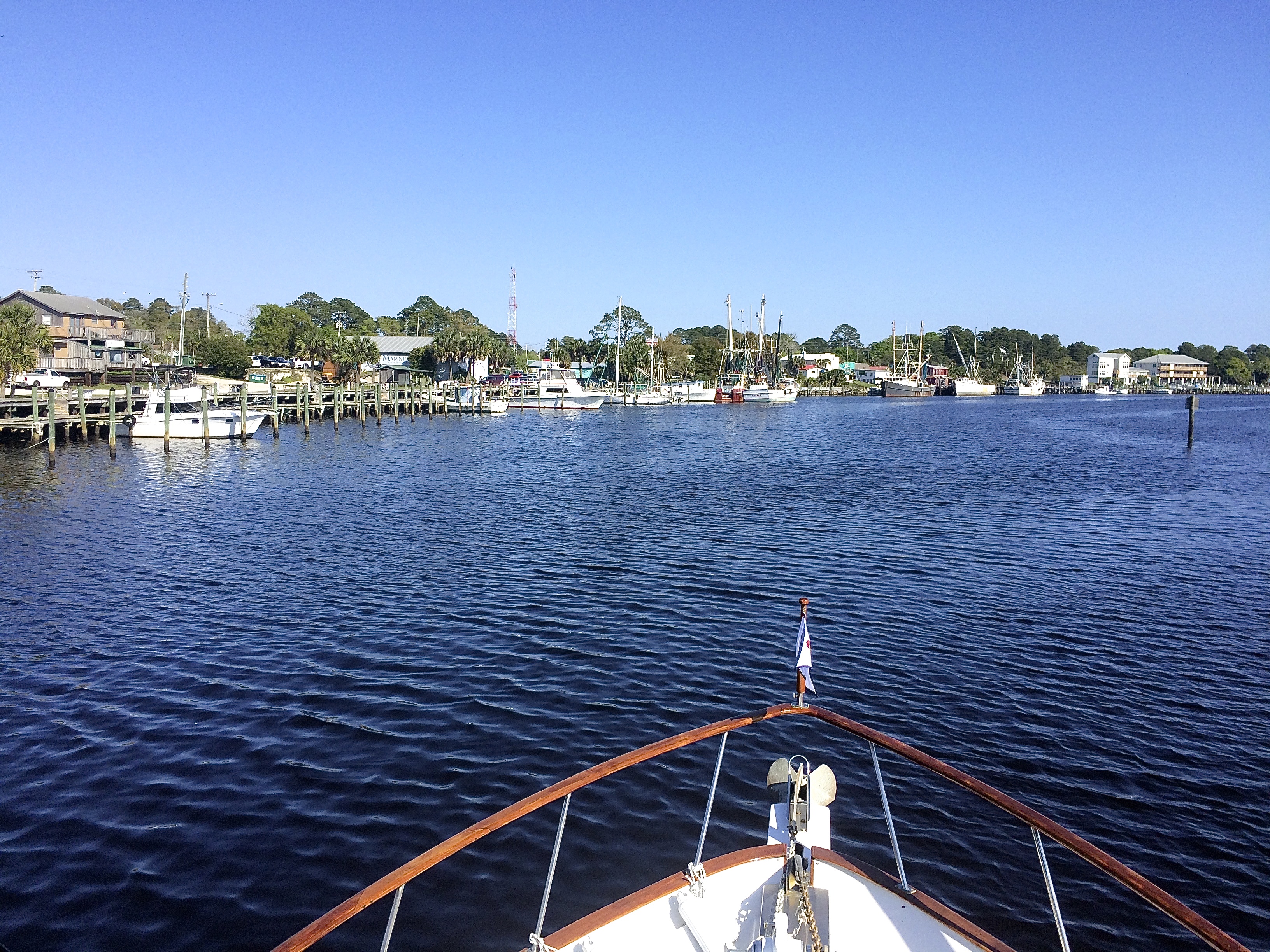 3/29 – 3/30/15 – Sunday morning we walked to the local Baptist church. Very friendly folks, and after the service, we were invited to join them for their 5th Sunday covered dish lunch, complete with fried chicken, sweet tea, and lots of desserts. After church we walked back to the boat to take a short nap before the crossing.

The crossing is the open-water stretch between the eastern part of Florida’s panhandle down to the Tampa Bay area, with our destination being Clearwater. The currents in the Gulf drive northeast into that bend of land creating a significant area of shallow water (10 miles offshore can  be as shallow as 6 feet) which makes hugging the shore a tricky task. The crossing cuts 160 miles straight across the gulf, approximately 50 miles offshore, which for us at 7.5 knots (8.6 MPH) was a 21-hour trip. The weather, and specifically the wave action, is, of course, the key to a smooth crossing. And arrival should be timed with good light to see the many crab trap floats in the area just before Clearwater (just asking to get caught in your prop). 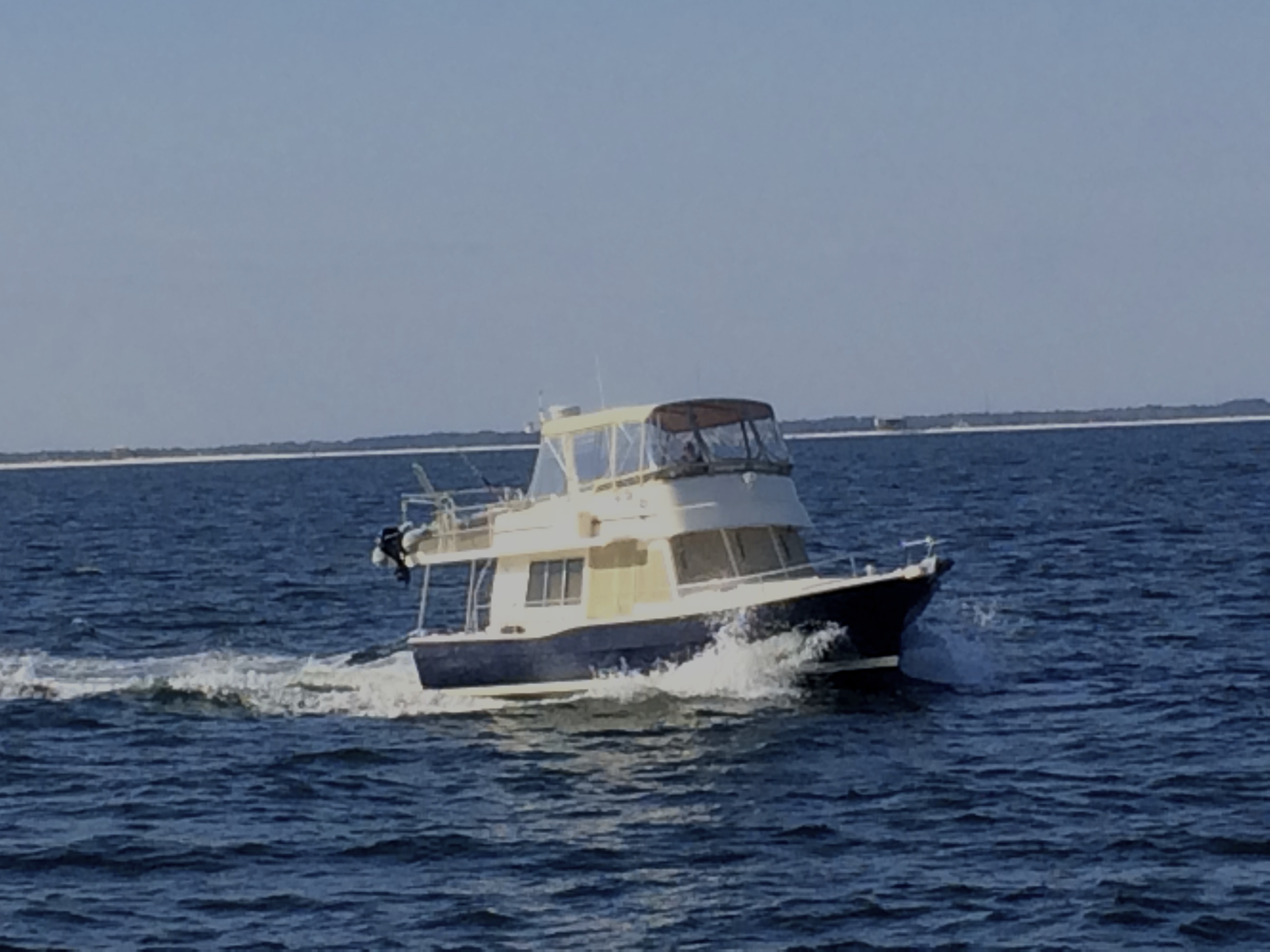 We hired a captain, Harold, to make the crossing with us due to our lack of experience with the boat in open water and because we wanted 2 people awake at all times. According to Harold and a couple of other weather forecasts, a Sunday night/Monday morning crossing looked good. But as with most weather forecasts, it was only a partial representation of reality. 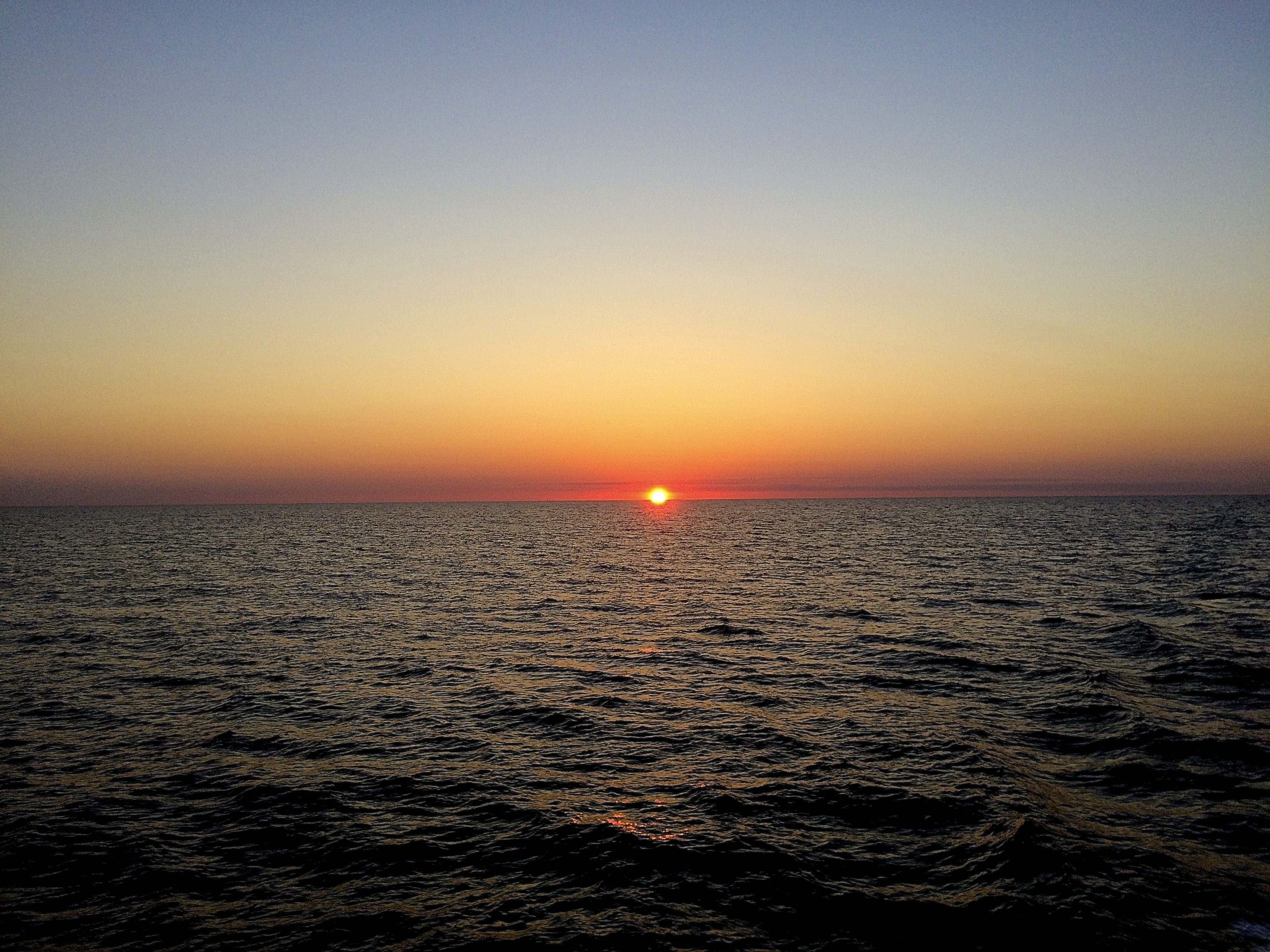 We left Carrabelle at 4:30 PM in relatively calm seas with about one-foot swells and slightly over half a moon already high in the sky and Blue Ghost II a quarter mile off our starboard stern. After the sun went down, it got almost glassy still, until the wind came up again. The seas built up until we were in 2 to 3 foot seas with whitecapped waves on top of the swells. It got so rough that at one point, Paula had to scoot on her rear across the flybridge floor to get to the steps to go down below. For a period of about 3 hours, we slowed down as Blue Ghost II was uncomfortable in the sea conditions. By the time the sun came back up, things calmed down and we arrived at Clearwater in almost calm seas. We had a sparkling grape juice toast with Blue Ghost’s crew to celebrate our safe crossing. During the night, we each got just a few hours sleep.

Tom rushed Paula to the airport for a 5:30 PM flight to Phoenix and upon his return to the boat, went to dinner with Flack and Steve, the owners of Blue Ghost II.

3/31/15 – Part of the deal with hiring a captain to assist with the crossing, which is not at all uncommon, is getting them back to Carrabelle. They can rent a car and drop it off in Tallahassee (60 miles north of Carrabelle) and hire someone to take them back to Carrabelle. Or you can rent a car and drive them back yourself, a 6.5 -hour drive one-way. Fortunately Harold’s wife was willing to meet us partway, so Tom drove Harold and the guys from Blue Ghost II (whose cars were also in Carrabelle) to a gas station 5 hours from Clearwater, then turned around and drove back to the boat, providing him with a fun 10 hours of driving (but saving a considerable amount of money).

4/1/15 – Before heading home, Tom decided to install the new faucet in the aft head sink. All went well until he returned to the boat from the hardware store and found that one of the parts he bought was mismarked and did not fit. But he found a temporary fix to allow him to take a shower before heading to the airport, with the project half-done and awaiting completion upon our return.

Overall the crossing was a good experience and we are getting more comfortable with the boat and its systems. And Lord willing, the list from this point on will remain short.