7/1/21 – 9/9/21 – We were able to return to The Secret on July 26 after Tom got released by his neck surgeon, allowed to do anything that didn’t hurt. So, it was time to go back to work on our projects to get the boat cruise-ready. The “to do” list was still very long. 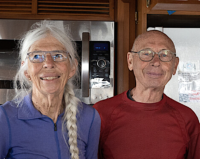 But before we bore you with the project list, let us start out by telling you about one of the nicest things anyone we did not qknow has ever done for us. Jim and Betty own a beautiful 56’ DeFever and were in Anacortes, WA, along with their car they drove up from their home in CA. Tom had been working with Jim to set up computer registration for the upcoming DeFever Rendezvous to be held in September in Anacortes, but we had never met in person. When Tom asked Jim if he knew of any deals on rental cars (they had gone up to $100+/day in Seattle), Jim and Betty said they would be glad to loan us their car for a week or two as they didn’t need it in the walkable town of Anacortes. And they would drive the 2 hours to Seattle to bring it to us. Well, 2 weeks turned into…6 weeks!  It was truly a gift from wonderful people. Now that we have met them, we know it is just the kind, warm people they are. 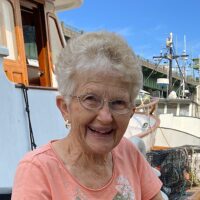 After 2 days of being back on the boat and getting very little done, Paula frustratedly thought, “We are never going to get off the dock to cruise this summer without help.”  She texted a few friends, and God blessed us with a immediate reply from Ron & Marie, friends from MO who cruised with us on Life’s TraVails, and who are top-notch hard workers. We arranged flights for them, and pronto, they were on the boat with us the next day, ready to pitch in however they could help. How many friends do you have who will join you for 10 days with 1 days’ notice to do nothing but work for room and board in crowded quarters? 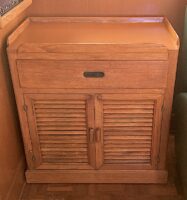 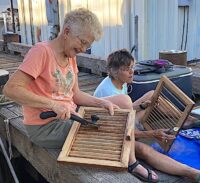 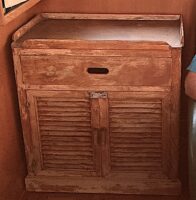 Thomas Boat Repair had done a great job on the dry rot repair. All it needed now was paint and we also wanted to repaint all the decks, but one painter cancelled on us and another painter we had asked was booked. Praise God, a few days after we got to the boat, he came to the boat and told he us had a big cancellation and wondered if we still wanted help. Yes!  We did!  So, Mike painted all the repair work and the dinghy deck while Tom, Paula, and Marie sanded, primed and painted the bow and flybridge decks. Marie also helped Paula scrape and sand a pretty teak cabinet that had lived on the aft deck and suffered from sun damage. It turned out beautifully once cetol (varnish) was applied and earned a new home in the salon. Marie cleaned and oiled some interior teak, and even prepped a few delicious meals for us all while they were with us!

– Cleaned up an oil leak from the flybridge steering column and replaced the leaking O-ring; the full-strength degreaser burned his skin and literally curled his fingernails (he didn’t read the part about diluting it!)

– Rebuilt the port engine stop solenoid bracket, cleaned engine air filters, found and replaced a bad fuel pump and got sprayed in the face with diesel while priming the injectors (you’d think Ron would want to go home after days like this…but that’s not Ron!)

– Found a leak in the hot water system, so he and Tom replaced the hot water heater and Tom took 2 “antifreeze baths” in the process

We were so grateful and forever indebted to Ron and Marie for their cheerful willingness to help us on The Secret. We never tire of their company and they have more energy than people half their age!  They are “forever friends” who have been a true blessing from God this side of heaven. And with all that work, we even enjoyed Qwirkle games some evenings, picked blackberries and made homemade blackberry ice cream! 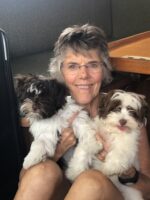 One fun thing while Ron and Marie were with us was driving to Issaquah to meet Whisper’s breeder and pick up Whisper’s sister for Paula to fly home to Phoenix to deliver to friends who had bought her. Itty Bitty, so named because she was a twin (2 puppies born in one sac) and half the size of her siblings at birth, was a super-loving puppy who crawled up on Paula’s lap and went to sleep, something energetic Whisper had never done. Whisper and Itty Bitty had a rambunctious time playing with each other for 2 days until Paula could get a seat on the plane to fly her home. 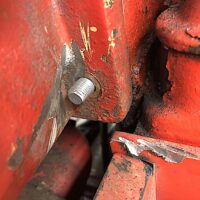 After Ron and Marie left, our rate of repairs slowed way down. We had to call an engine repairman after Tom snapped a bolt trying to get the exhaust elbow off to replace a brass fitting and another bolt was so close to the elbow he could not get a wrench on it and it had to be cut off (great design). It could have been very costly, but Steve Jones, engine mechanic with Riptide Marine, came quickly and helped Tom fix the problem.

We went home for a week to enjoy time camping with friends and get Whisper’s last shot for full immunization. We could finally quit carrying her everywhere we went and let her off the boat to walk!  While home, we got a call from Thomas Boat Repair telling us we might have a fuel leak. Upon return to the boat, Tom found that yes, we did have a fuel leak – with 35 gals of diesel in our bilge!  While trying to clean up the mess, Tom mistakenly ran the bilge pump for about 10 seconds (putting a fuel slick on the water), which later was followed by a “nice visit” from the Coast Guard. Tom fessed up and showed them the steps he had taken to fix the problem, and they politely gave us a warning letter rather than a fine – and told us not to let it happen again in the next 2 years or it would be more than a warning! 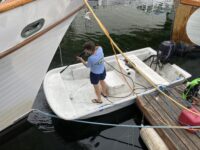 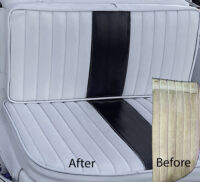 Mike showed us how Dupli-Color Vinyl & Fabric Specialty Coating could be used to bring seat cushions back to beauty!  Paula cleaned the seat cushions from the dinghy and flybridge helm seat, then Tom spray-painted them. Amazing…and Mike says it lasts a minimum of 6 months even on hard-used items.

Paula began working on her specialty – brightwork (boat talk for keeping up the teak varnish). The Secret’s teak rails were treated with cetol rather than the more traditional varnish. Because of that, we needed to continue using cetol. The choice was to just cetol the “bad spots” or strip the whole thing down to bare wood and begin again. We prefer to do things “right” rather than just “get by,” so Paula stripped the handrails from the mid-port, around the aft, to mid-starboard all the way to the bare wood while

Whisper watched from her doggy playpen. Tom epoxied some bad spots, put teak plugs in several screw holes no longer needed, and then applied 2 coats of penetrating epoxy all around. Paula followed with 3 coats of cetol flat (and later 2 coats of cetol gloss). They looked great and we finally felt like we were doing some “normal” boat maintenance rather than just fixing stuff! (As you can see from the picture above, we are squeezed in tightly with other boats in the repair facility.) 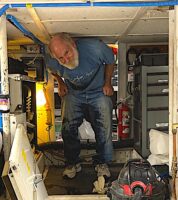 One day, Tom went to start the generator and oil shot out all over him and his clothes, which subsequently had to be thrown away (- the clothes, not Tom). Tom had inadvertently left the old gasket in place when he changed the oil filter. After removing it, he started the generator again and the freshwater pump would not turn. He took it apart and found a seized impeller which required a new one, but at least that was $50 instead of a $500 pump!

Tom also changed the impellers in both engines. In doing that, he discovered the starboard engine had impeller parts in the oil cooler. This would ultimately have caused the same disaster we had on Life’s TraVails, an overheated engine requiring the replacement of a piston (see 5/16 blog). Thank you, Lord, for having Tom find this!  Prevention is certainly less costly than cure.

We bought Whisper a life jacket and took her for her first swim in a lake. She didn’t seem to like it, but she knew what to do. Hopefully, she’ll never need to call on that skill by going overboard inadvertently. (Click on the image to see the action.)

On August 28, Mike finished the painting and we lifted the large new dockbox that had been on the aft deck to the freshly painted dinghy deck, as well as the bikes and some other stuff that had been strewn around the boat…and, oh yes, the dinghy. We were finally getting closer to leaving the dock.

There were days we regretted selling Life’s TraVails instead of bringing her over to the West Coast. It would have been expensive to have her shipped through the Panama Canal, but at least she was a known entity. With The Secret, in addition to the many things we knew we needed to fix (which we thought were mainly cosmetic), there was a lot to learn about the new-to-us old instruments like radar, autopilot, navigation system and total operation.

But we are blessed. She was running, dry inside, and had “good bones.” We just needed to work out some of the kinks.