Home Our Blog The plan is coming together

The plan is coming together 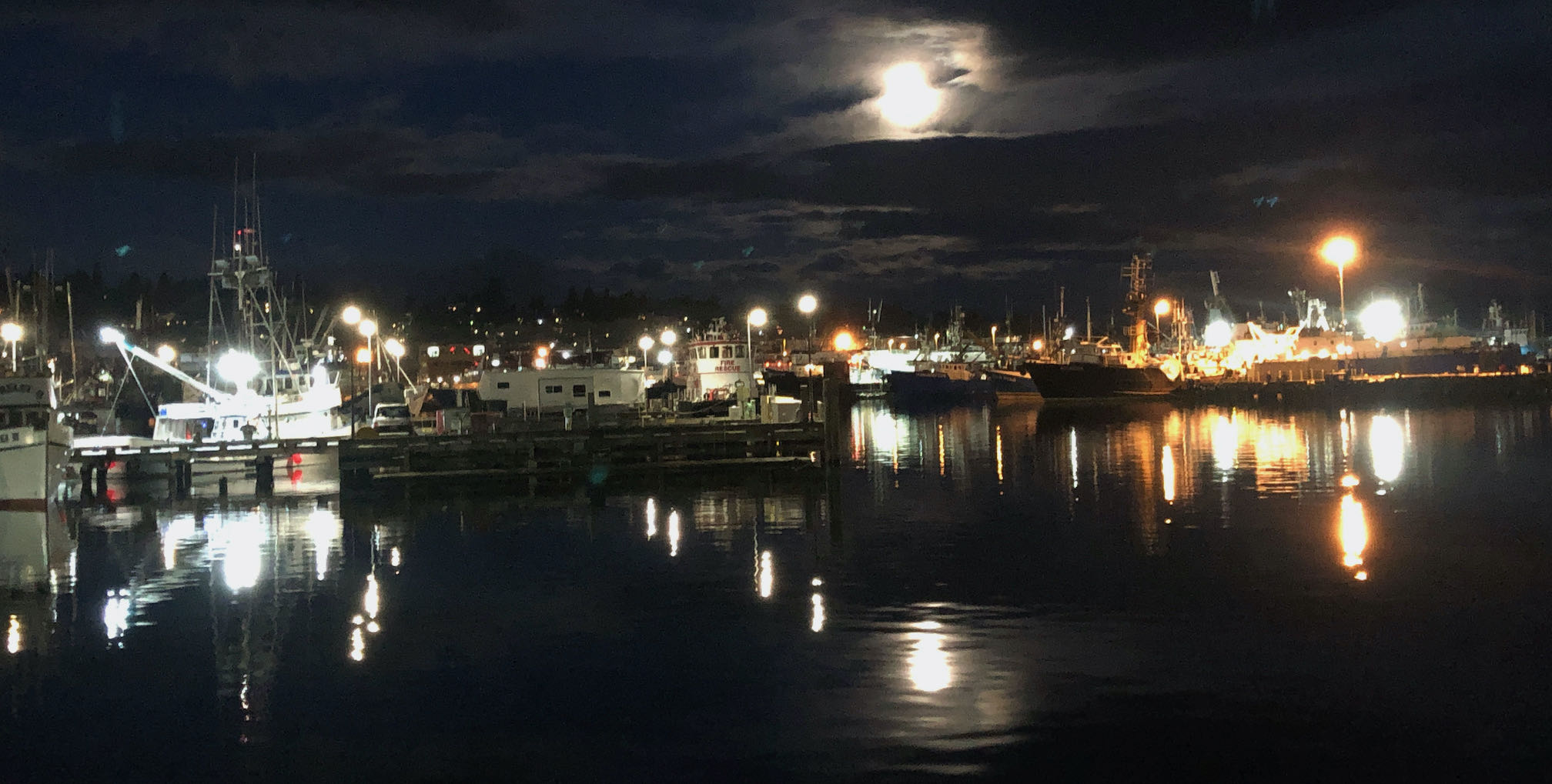 11/01/20 – 06/30/21 – Well, yes, the plan is coming together…just not as quickly as we had hoped. As we told you last (many moons ago), the plan was to leave the boat in Seattle and get the needed repairs done, then spend the summer cruising the San Juan Islands. But it is almost mid-summer, and we still haven’t left the dock.

We started off by making a list of the things we wanted to do to the boat (the major one being repair of the dry rot). It ended up being a sizeable list, which included getting all our personal stuff to the boat from Phoenix. Before we could make that trip though, there was one construction project to be done at home.

When we bought The Secret, she had a big, blue, beautiful over-stuffed couch and swivel chair in the salon, but we decided they were just too big and overwhelmed to space. So…it was out with them both and in with a built-in settee. Once the couch was removed, markings showed there was originally a built-in just like the one we planned. So, Tom built the base for the settee in our garage in Phoenix and it was included in the trailer-load of stuff we drove to the boat in late November 2020.

Once we got all our stuff to the boat, we found the overall storage to be less than our DeFever 44 (even though The Secret is a DeFever 49’ and 5’ longer). But the storage under the new settee proved to be a huge help. We took a week unloading the trailer and putting things away, while shuttling some stuff off the boat for either a trip to Goodwill or return to Phoenix. We also sold a few things off the boat, including some fishing-related gear, since The Secret was previously a commercial fishing boat.

The real fun actually took place before we started putting things away. We emptied all the lockers, cleaned and painted them (pictured right), then inventoried everything as we put it away. And as we did, we had to figure out if we were keeping our can opener or the one that was on the boat, along with 10 dozen other similar decisions. But at least when we were done, we mostly knew what we had (and where it was).

The list of projects was extensive and included the following:

And all that was mainly just our work inside the boat.  The big work was on the outside! 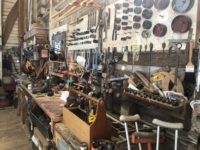 In mid-January, we moved the boat to Thomas Boat Repairs (TBR) for dry rot repairs (which in our case was really wet rot). TBR is just a half-mile from Fisherman’s Terminal where we purchased the boat and were still docked (pictured at top). We don’t think we could have made a better choice than TBR. Their professional staff of shipwrights did an excellent job and kept us up to date with progressive pictures when we were not onboard. The owner, John Thomas, is himself the owner of an wooden 52″ DeFever and has been messin’ with wooden boats for over 40 years. He built his first boat at the age of 14, so there was not much he had not seen already. This was invaluable, as he personally oversaw the project and did some of the work himself.  And he’s a really nice guy. 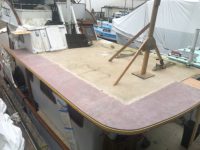 One of the issues faced when one starts a project like this is there is no way of knowing how widespread the rot really is. For example, it was obvious the underside edge of the dinghy deck was bad, but did the rot continue past the cabin wall and into the salon ceiling? If it did, the project would be much more complex, not to mention longer and more expensive. On that front, we were blessed that most of the rot didn’t even come close to the cabin wall. So, TBR was able to remove the bad and replace it with new marine plywood (2 layers to match the original) and then glass over (pictured right). The wooden beams along the outside were also rotten and replaced with custom-fit beams, ending up at least as good as new, if not better. That part of the repair went all the way around the outer edge of the dinghy deck, as well as most of the flybridge brow. 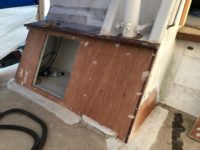 We were not so fortunate with the propane locker, which we had hoped could just be repaired with a new door and a couple of replacement braces. It turned out to be a total loss, and there were some serious drainage issues at the base of the mast. The only logical option was to completely rebuild it, along with leveling the deck and fixing the drainage. And that problem worked its way up to the flybridge where the port seats were also a total disaster. Since we were not sure what we ultimately wanted on the flybridge, we opted to just remove the rotten seats and replace it for now with a garden bench with storage underneath and a small end table. Click to see more repair photos. 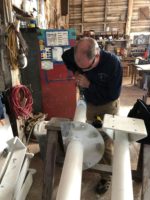 We had some help along the way. Our friend, Rod, from Phoenix, spent a week on the boat with Tom doing “fun things” like replacing a clogged hose from the head to the holding tank and replacing the old 110V dinghy winch with a new 12V version, along with all the necessary wiring. Rod also replaced the fuel screen and nozzle on the diesel heater. He did most of the work while he was there because Tom’s hands and neck were giving him fits. 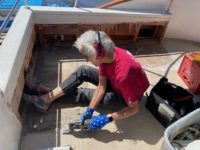 Then Susan came up for a week to help us. She helped Tom change filters in the engine room. They built a platform in the lazarette to hold the washer/dryer, which was then moved through the salon floor to the engine room, then through the door to the lazarette (which TBR had widened to give a half inch clearance on each side). Susan also helped remove the port flybridge seats, painted, cleaned, and a bunch of other stuff.

Both Rod and Susan were a huge help, and we cannot thank them enough! 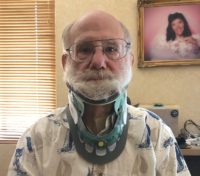 But then it happened. Tom went home from the boat with considerable pain in the neck, shoulders and hands stemming from a diving injury about 50 years ago. After an MRI and consultation with several doctors, he decided an anterior cervical discectomy fusion (surgery) to fuse C5, C6 and C7 in his lower neck could be postponed no longer, and surgery took place on May 26. The good news was, he went into the operation with a pain level of a 7 and came out 2 hours later at a 3 and grip strength improved immediately by about 50%. The bad news was, he then had to wear a cervical collar for 6 weeks and not lift over 20 pounds. Three weeks later, we returned to the boat, knowing he could not do much, but, of course, he overdid it and paid for it by the time he got home. So…no more trips until after the collar is off. Your prayers for his complete healing would be most appreciated. 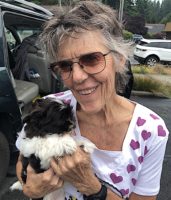 That trip to the boat was really two-fold. Paula had never owned a dog but wanted one her whole life. But our working/traveling lifestyles just would not permit. She always measured how good a walk in the neighborhood was by how many dogs she got to pet. So, while we were in Seattle, we took possession of Whisper, a 3-pound, 10-week-old dark chocolate and white Havanese puppy. Whisper spent her first few nights with us on the boat, then flew home to her second home in Phoenix. We’ve already figured out things in the Vail’s house will never be the same! More puppy pictures and videos are on Paula’s Facebook Page. 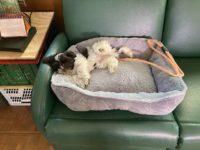 The other reason for the trip was to receive the new green leather-like dual recliner (similar to the one we liked so much on Life’s TraVails) to match the new salon settee cushions. It earned Whisper’s “good sleeping” approval rating.

Jobs on the boat yet to be done:

Our prayer is for Tom to be medically released by mid-July, for the essential stuff to get done, and to actually be able to use The Secret by the first of August for the rest of the season. It was not as we planned it, but God holds us in His hands.

For best viewing, scroll down with your curser in the white area to the right of the images 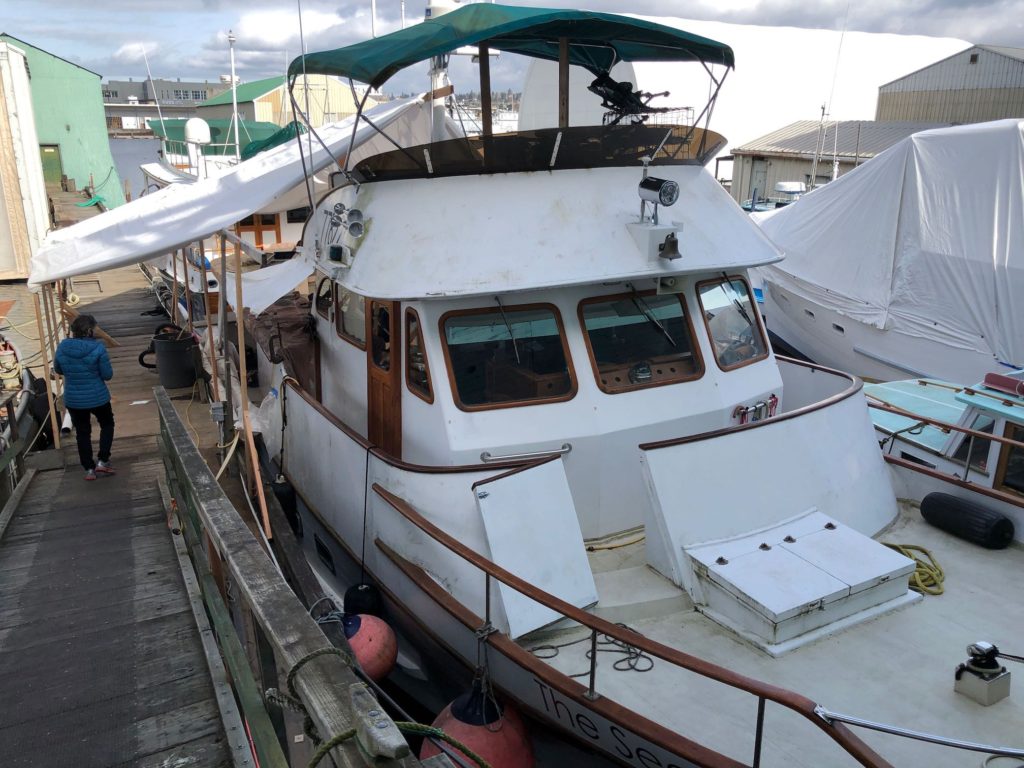 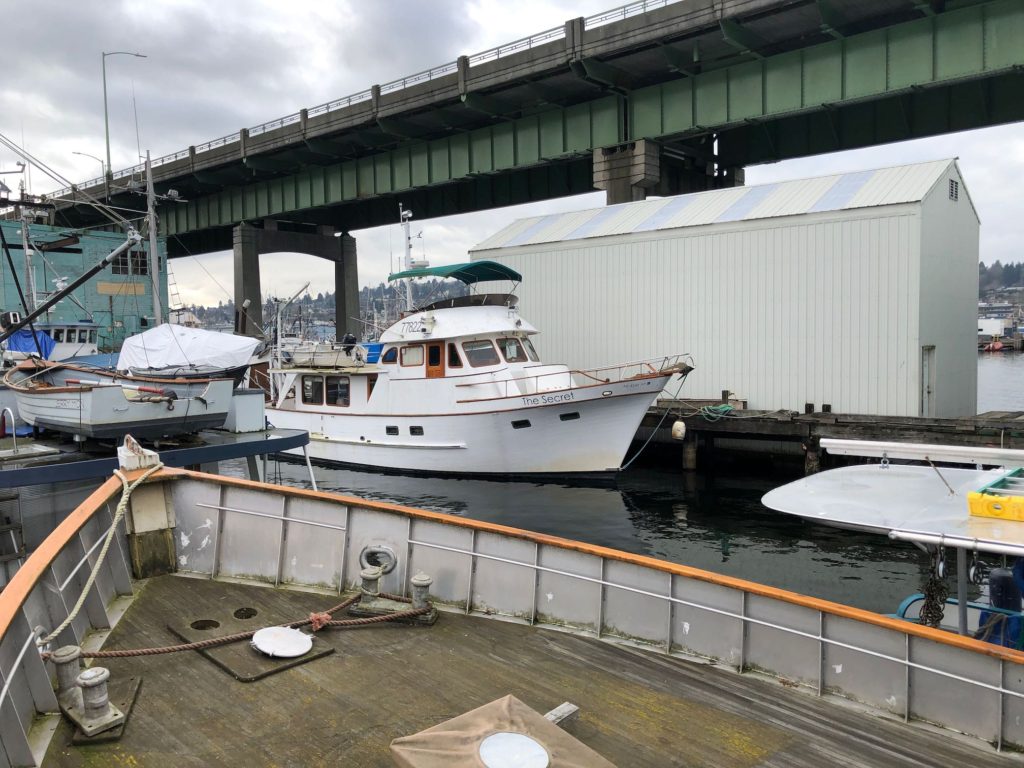 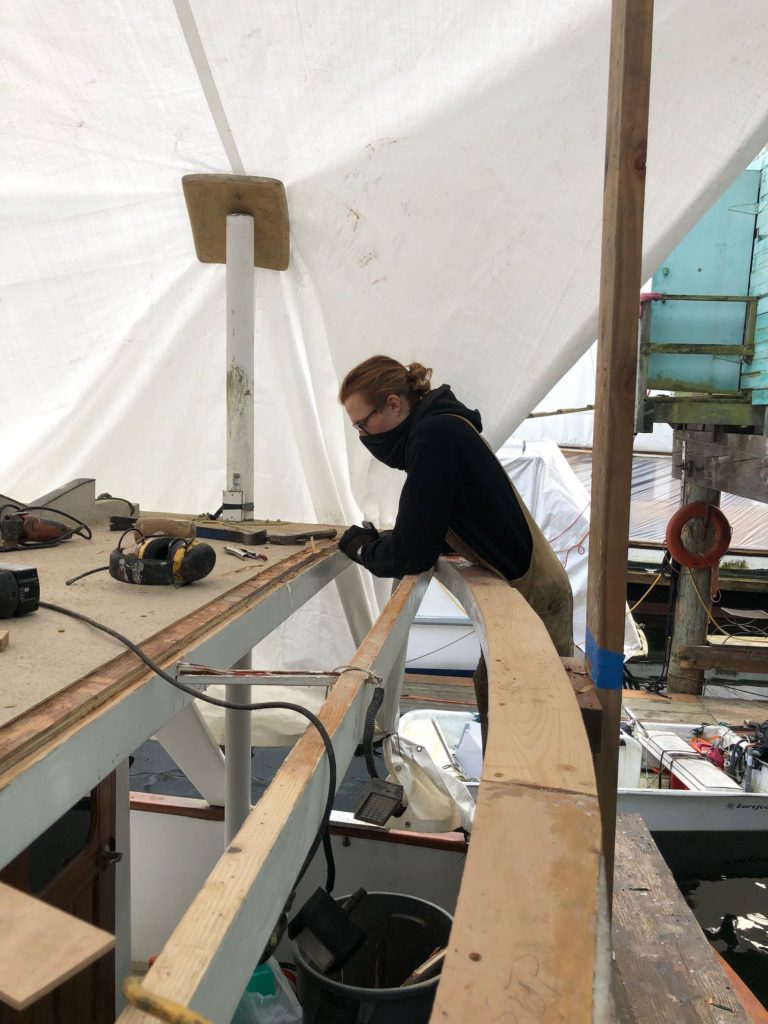 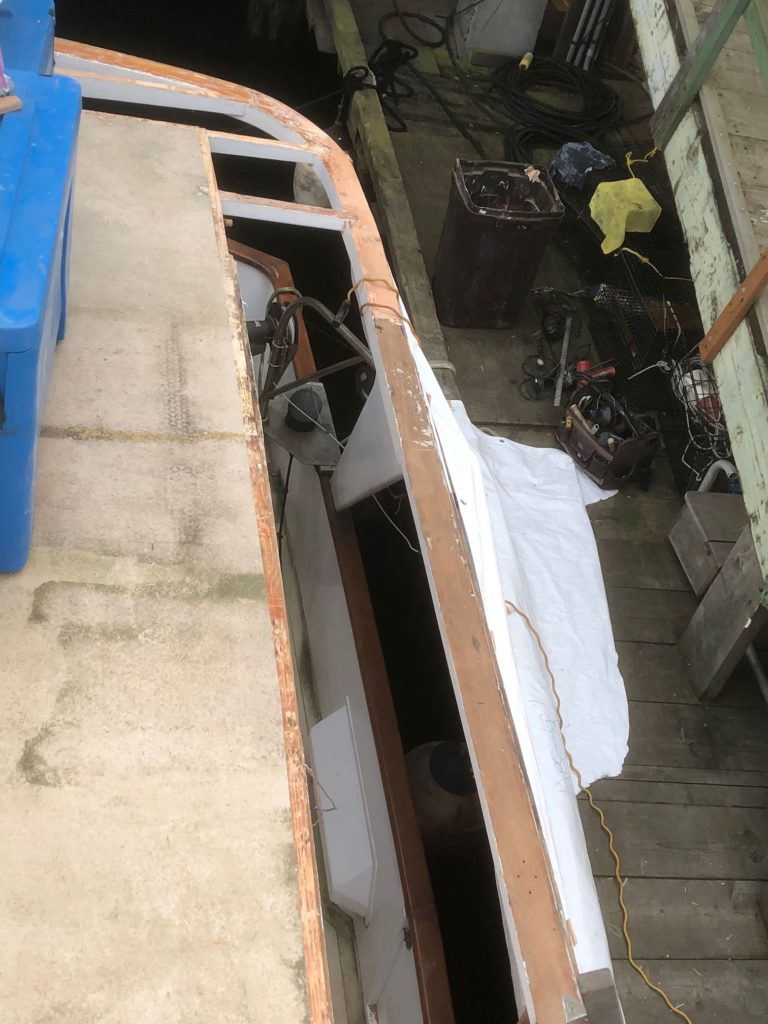 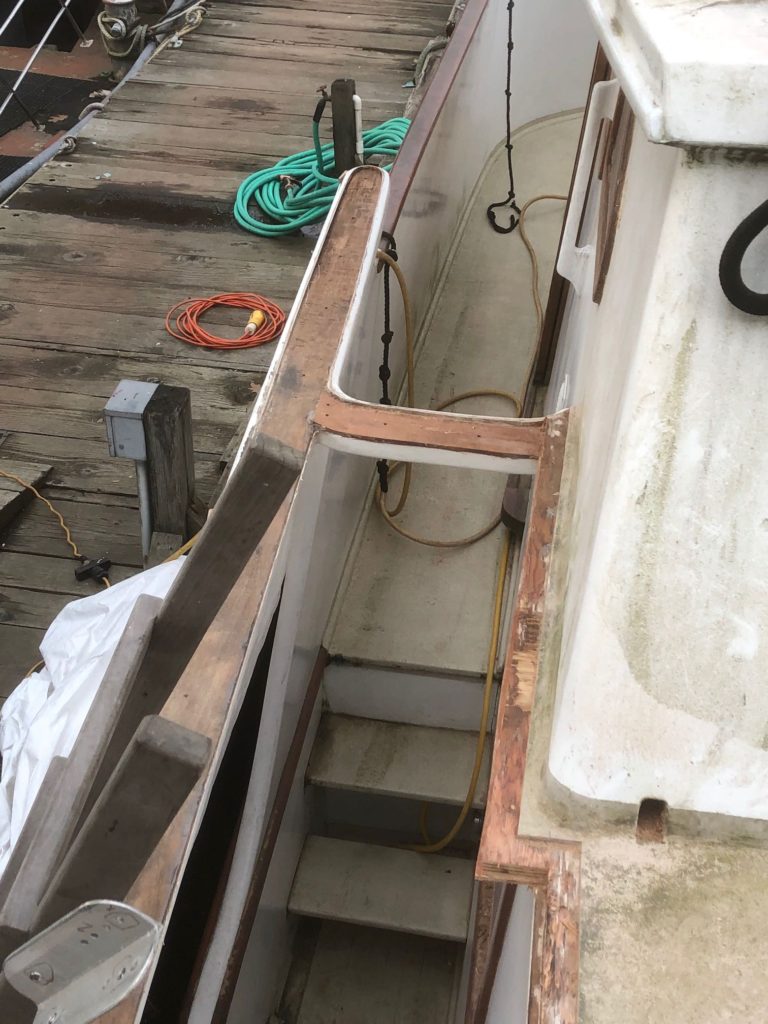 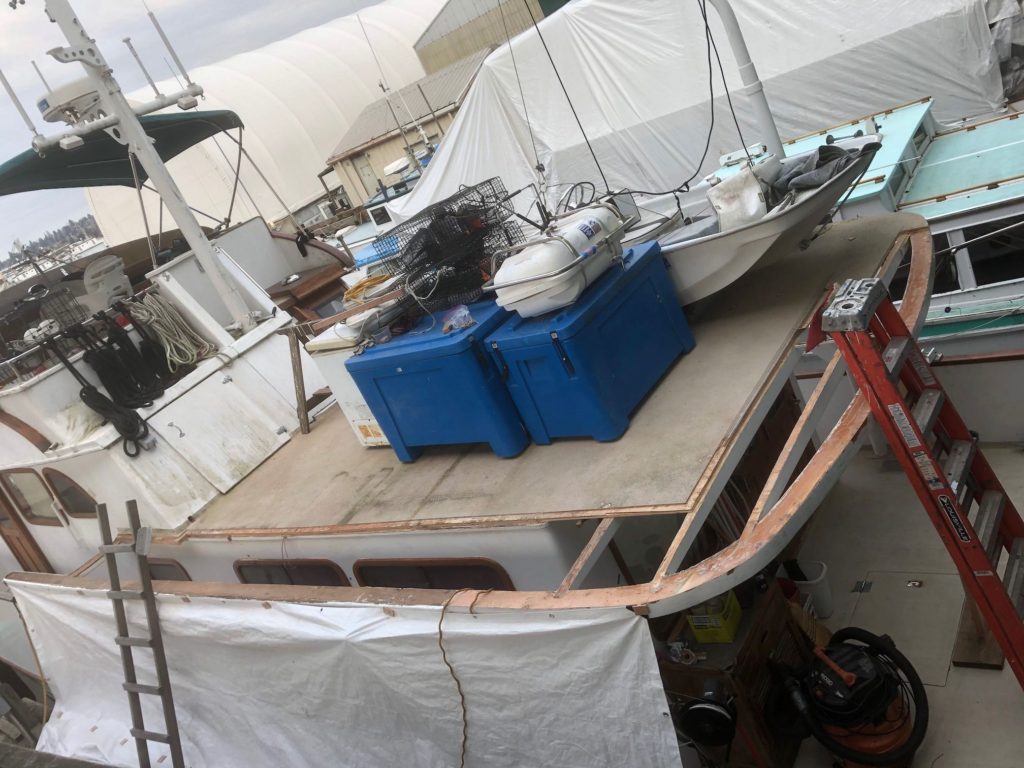 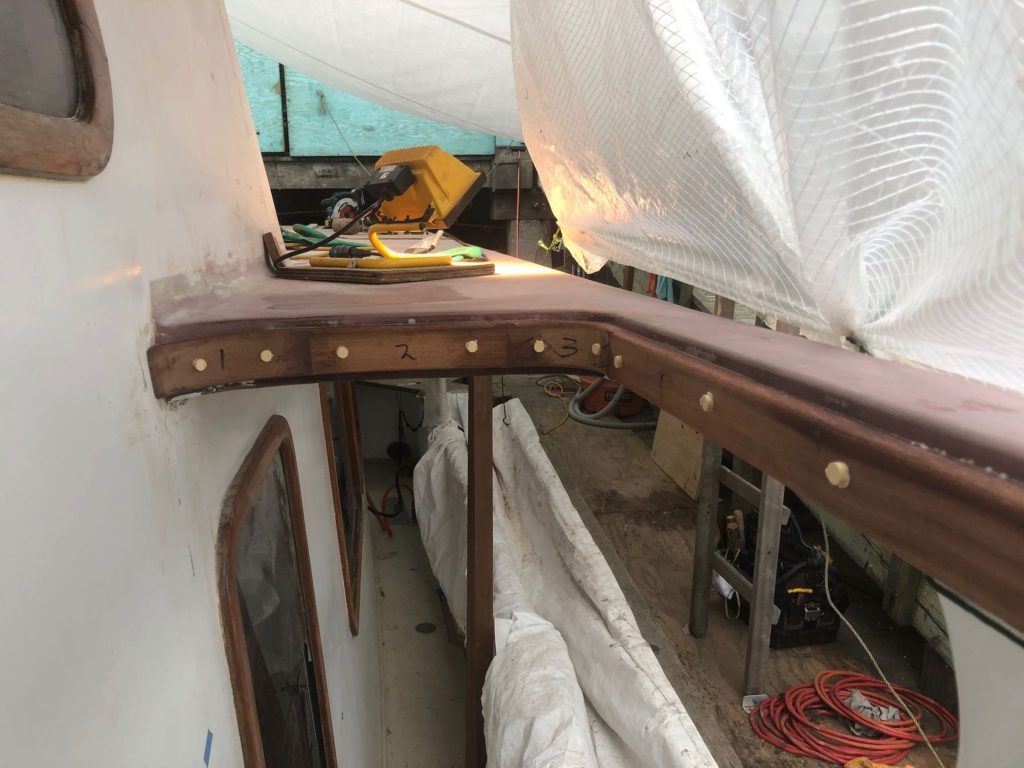 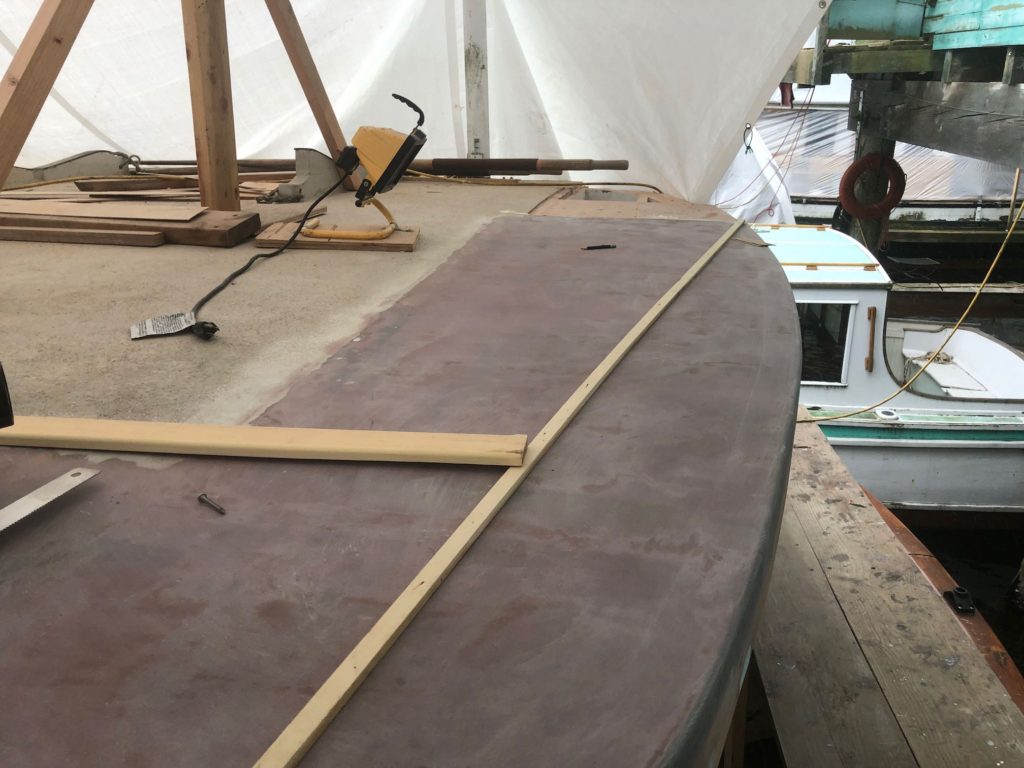 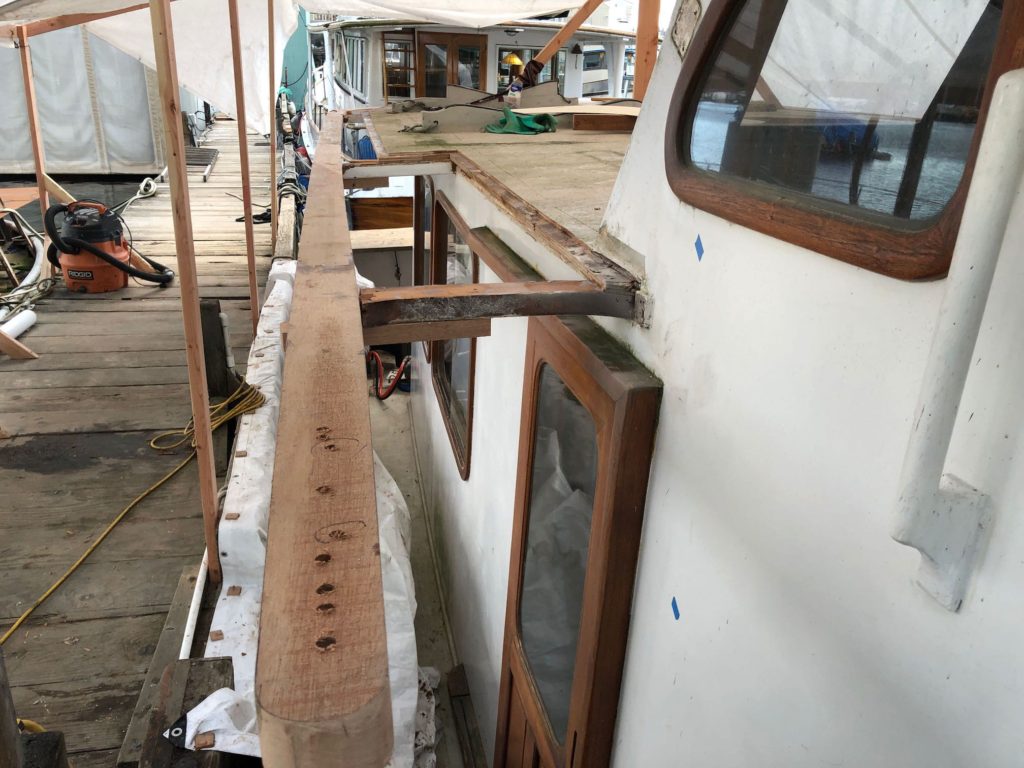 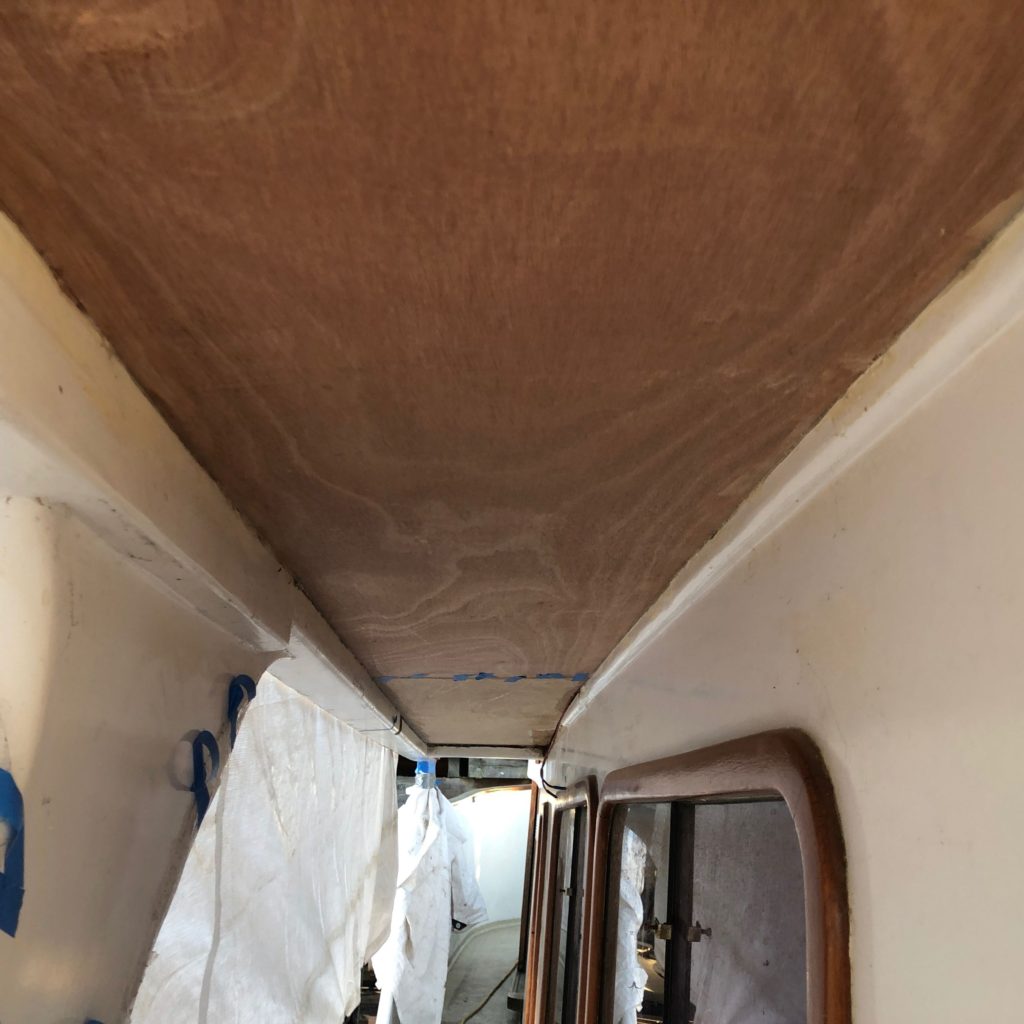 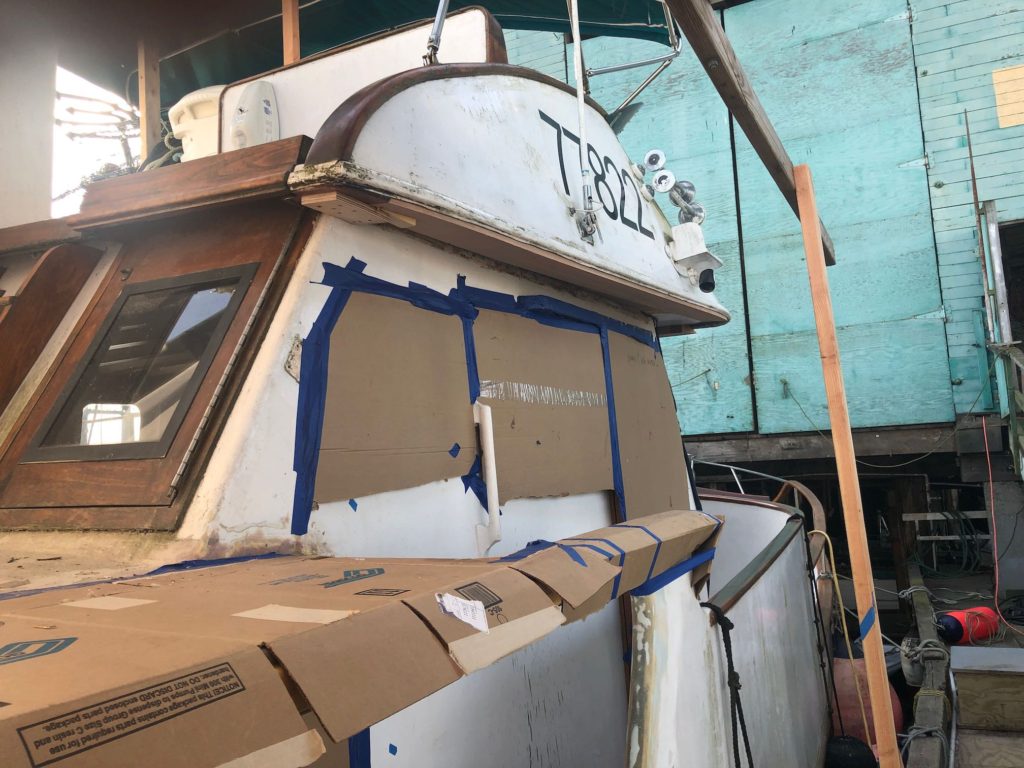 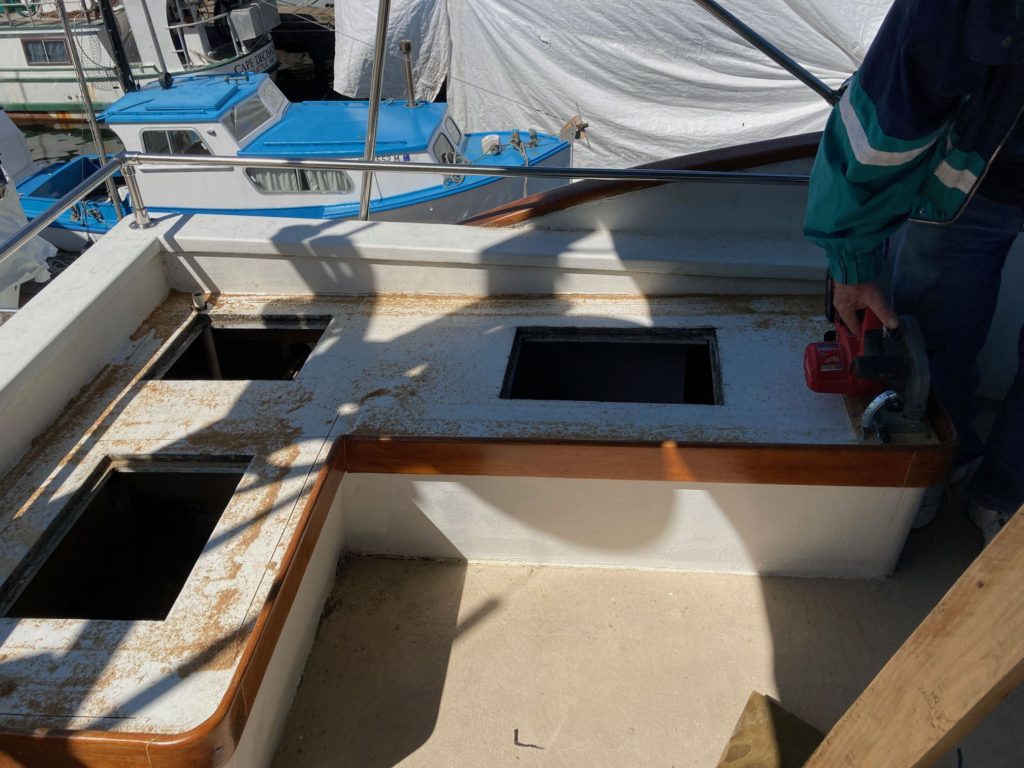 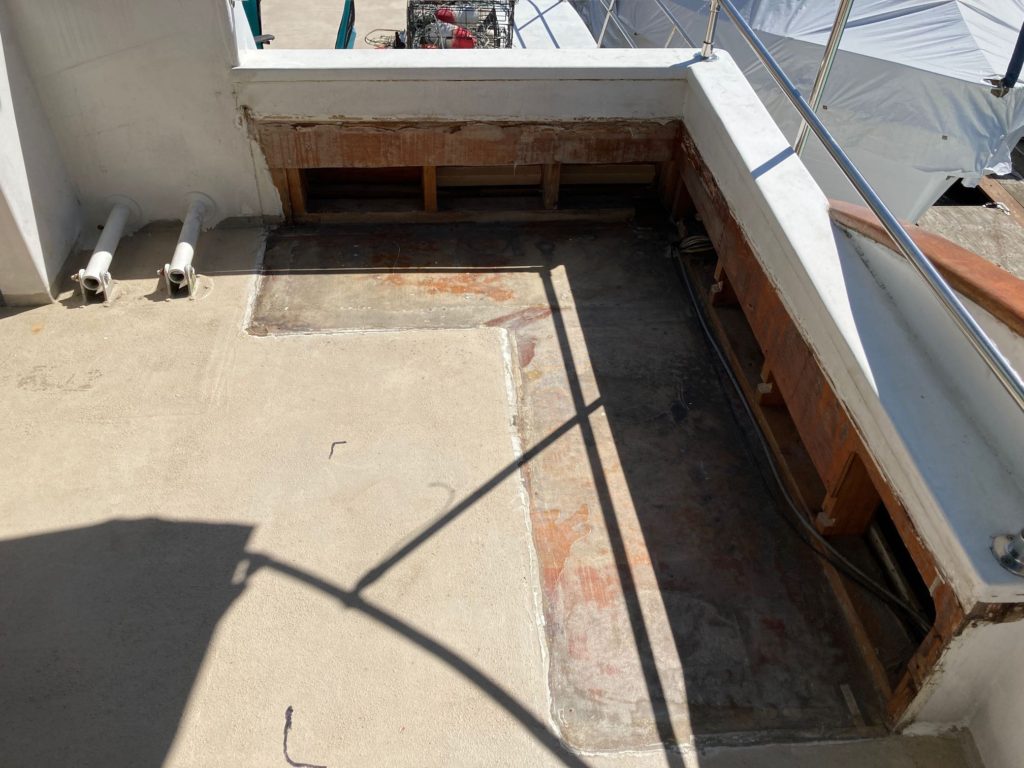 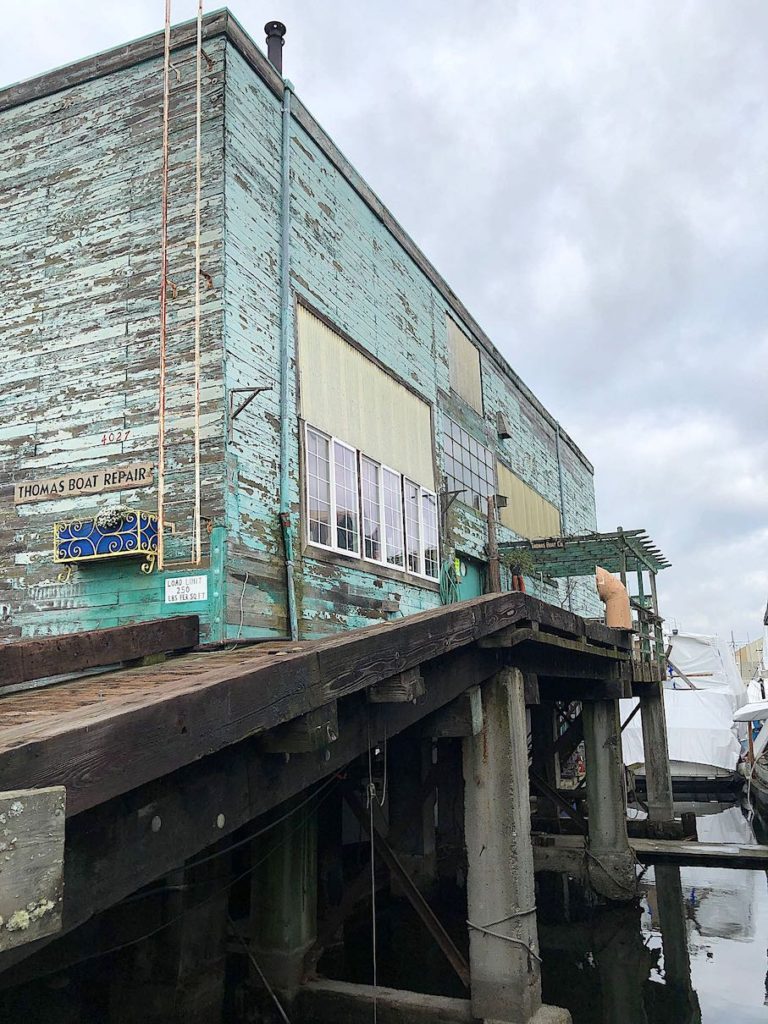 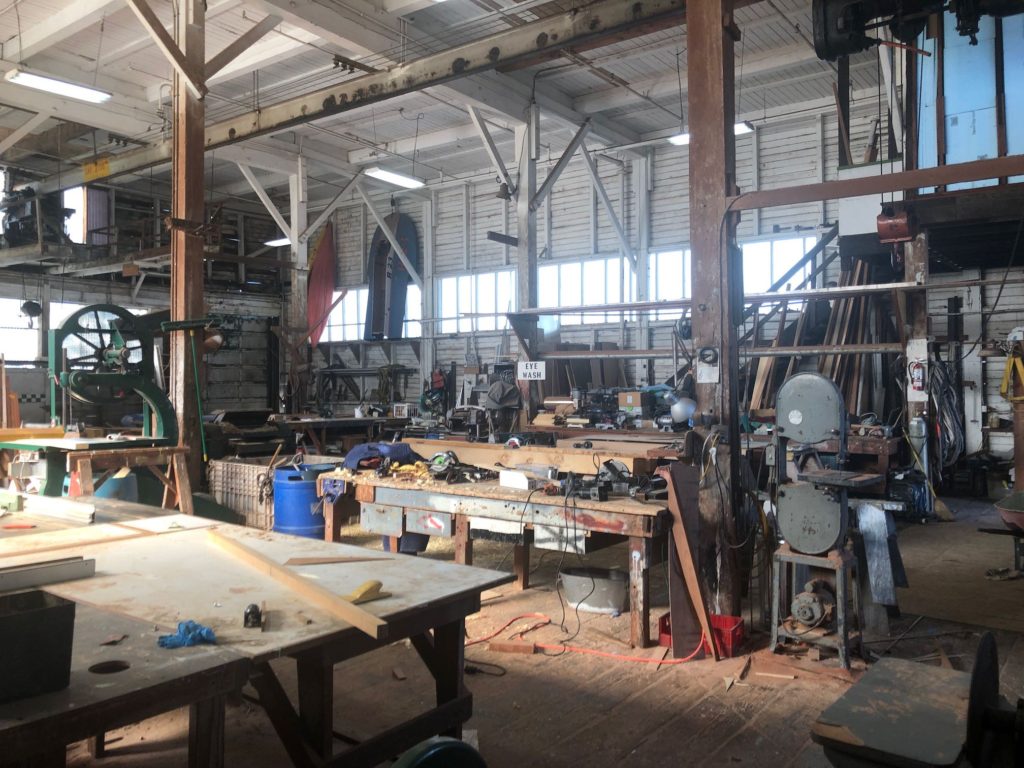