8/27 – 9/8/2015  Summary:  Tom flew to the boat to both prep for hurricane Erika and work on building the frame for the new flybridge cover. Even though Erika turned out to be a dud (praise God!), the threat caused a lot of work and a 4-day delay in the project. 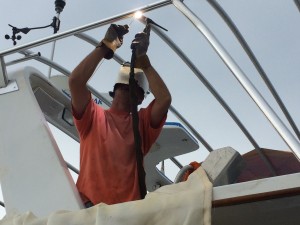 Tom spent 6 long days working with Jeremy Harper, the frame fabricator, to cut, bend, fit, weld, and bolt the frame in place. All in all, the frame is made up of about 100 pieces of aluminum, mostly round tubing. While we had done the basic design beforehand (see last post), lots of “little” decisions had to be made along the way, like where the uprights attached to the boat and at what angle.

Although Paula’s arrival was delayed by a Phoenix storm that caused significant damage in our neighborhood, she arrived in time for Tom’s birthday.

With only a few relatively minor items left on the frame, we headed home to oversee the next Fellowship Adventures event.

This is where you stop reading, unless you are interested in the details. 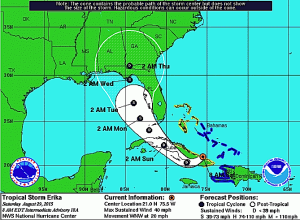 8/27-9/8/2015: This was our first “hurricane watch,” so figuring out just what had to be done was a bit of a task. Of course everything that could blow away had to be secured. Tom removed the old flybridge enclosure canvas (which had to be done anyway). Then the boat had to be super-secured to the dock, which took 13 lines. The evening it was all ready, Erika was downgraded to a tropical storm, and its projected course changed from central FL to the gulf coast. Stuart saw almost no effect from Erika. 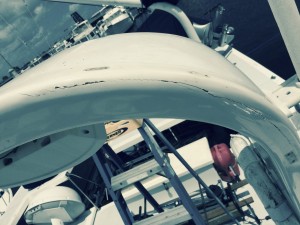 Delayed 4 days from starting the new frame due to the threat of Erika, Tom had time to get some of the prep work done, like filling another 70 holes in the radar arch (bringing the total to well over 150) and removing the old frame. When he took the old canvas down, he also found an 18” crack in the arch needing repair.

It also gave him time to somewhat finalize the design of the anchor pulpit replacement, and get the new laminated beam ordered. He got an estimate to encase the pulpit in fiberglass and paint it, but at $1,200, it looks like Tom is going to learn something some more about fiberglass.

With help from Steve, who lives on a sailboat down the dock, the lines were untied and the boat moved to a marina where Jeremy could get his welding machine close to the boat. After installing the 2 x 4 supports to hold the frame up, Jeremy, Tom and 2 others lifted the front section of the frame on top of the boat. Over the next week (in between rain showers), we measured, cut, fit, welded, and bolted the frame in place, not to mention measuring things 14 times to try and get it centered on the boat, where nothing is either square or level. 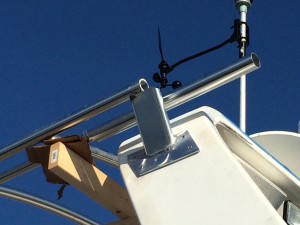 While the front section was mostly built in Jeremy’s shop, the rear section was assembled and welded right on the boat. Since this was a custom design, every piece had to be uniquely cut and bent. For example, we spent the majority of one day fitting and building 2 brackets that attach the frame to the radar arch and bolting it on (pictured left). It sounds simple, but included cutting two access holes in the arch to get to the bolts while working around all the wires running up to the top of the arch. 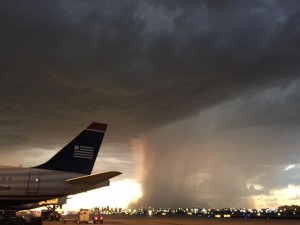 Paula had planned to join Tom on the boat on the Sept 3rd, but a storm that damaged the house in Phoenix caused a delay. We dodged hurricane Erica, but got hit instead by a microburst in Phoenix which took down our front tree, shingles off the roof, broke the gate, and knocked power out for 47 hours. But Paula got there on the 4th, just in time for Tom’s birthday. 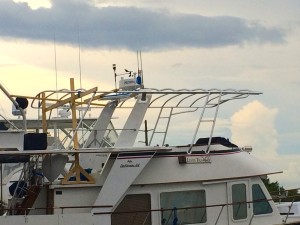 By the time we left on the 8th, Jeremy only had a few items left before Steve Schrimsher could start the canvas work. Tom will head back down in about a week to help make the final plans for the canvas part of the enclosure.

Although it has taken longer than originally planned, we were very pleased with the quality of work, and are looking forward to being able to see where we are going when we drive the boat!