10/5-8/2015  Summary:  Tom took a short trip to the boat to meet with Steve on the final design of the flybridge enclosure and get some work done on the bow pulpit. Steve had installed the top cover on the new frame and as Tom walked up to the boat (pictured above), he was extremely happy with the way it looked. Over the next few days, about 10 other people stopped by and told him how good it looked too!

The meeting to finalize the design took all of about 30 minutes. We decided to have a 4’ “smile” in the front center, with a “frown” on both sides. The sides will each have one large “smile” between the arch and the frame support. (A “smile” is a U-shaped zippered window which can be opened from the bottom, and a “frown” is an upside down “U,” unzipped from the top. The “frown” allows the top of the window to be opened for air circulation even in the rain, or it can also be zipped all the way down.)

Then attention shifted to the anchor pulpit. The beam had been ordered a month previously from Home Depot, so Tom picked it up. But their saw could not cut the beam (which Tom had been planning on, since he was in a little Toyota rental car and the beam was 10’ long). The guy from HD helped him load the beam, he tied it in, hung a red flag on the back and then Tom headed for the wood shop. (On the way, he had to stop and buy a 12-pack of beer, as that was what the woodshop guy told him he wanted to plane it down.) It had to be carried up stairs, both sides planed smooth, cut down to 7’, and loaded back in the car. It was well worth the 12-pack! 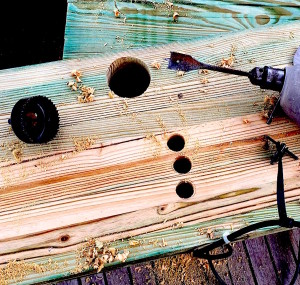 Although it was heavy, getting it on the boat was not that hard. Over the next couple of days, Tom drilled, cut, routered, and sealed the beam, so by the time he left, it was almost ready for paint and installation.

And one final note. With great sadness, we must inform you that Tom lost his title of “The Sight Glass Ball Guy!” (See last post for background.) When he arrived at the boat, he went to check the drinking water level only to find his sight glass balls had waterlogged and sunk to the bottom of the tube. He then had to send a note to all the people to whom he sent balls, and, to his shame and embarrassment, posted a note on the DeFever forum of his failure.

This is where you stop reading unless you are interested in the details. Thanks for stopping by. 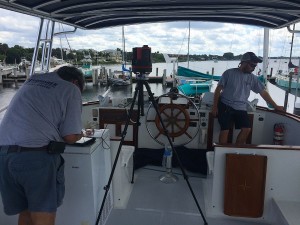 At the meeting with Steve, Tom basically went with his recommendations. The objective was to be able to open as much of the enclosure, and have as much “glass” as possible. After they agreed, Steve later brought his helper back to make pattern for each section. But he then came back another time to try out his new laser pattern/measuring system. The laser pointed to targets held along the edge of each panel and recorded the location and an image of the area, allowing him to create a detailed pattern in the shop. This was a brand new system for Steve and we will be the first to have a Steve Schrimsher Laser-Fit Enclosure. After being measured, Steve thought it would only take a couple of weeks to complete. 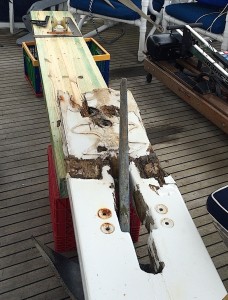 nce Tom got the pulpit beam cut down and planed smooth, the holes for the chain locker access, power cables to the windless, and the deployment slot had to be cut, using the old pieces as a pattern. The hole for the anchor locker access had to be spot on as it had to match up with a 2.5” pipe sticking up through the deck. Several passes with the hole saw produced a hole that slipped over the pipe like a glove! From there, the other holes were relatively simple.

Then it was time to take the skill saw to the bow of the boat and cut off the 2 “wings” where the pulpit would be installed, definitely a bit unnerving. The old system had both anchor lines going through the same 4” slot, so to deploy both of them, one had to be on top of the other. Holding his breath, Tom cut the wings off, giving a full 12 inches for the lines so they could then run side by side. Once the cutting was done, he did a test fit (pictured at top), and everything lined up just as if he knew what he was doing. Thank you Lord!

Now all he needed to do was fill in the voids left underneath and on the sides of the enlarged slot to make them watertight to make sure we wouldn’t end up in the same dry-rot predicament down the road. He used a Bondo filler with fiberglass fibers made for fiberglass cars. He’s learned to look for other sources of supplies and materials that don’t necessarily have “marine” tied to them, as marine versions seem to about double the cost.

The next step was to visit the fiberglass shop and get the supplies and “how to” advice from the experts. While he was talking with the guy in the shop, he happened to mention that the beam was pressure-treated. Well, turned out that was a problem because resin doesn’t stick to a treated beam. His advice was to use Thompson Waterseal and then paint it. So Tom went back to Home Depot for the Thompson’s and then turned the aft deck into a paint stall.

When he left, the beam was sitting on the aft deck waiting for the waterseal to dry, leaving the paint and installation for the next trip to the boat.

Some of the other small projects did not go too well. The stainless brackets Tom had bought for the wind instrument were the wrong size, the SSB antenna hit the new flybridge cover and may have to be moved, and the attachment for one of the VHF antenna supports remains unknown. But then nobody said this was going to be simple!