Home Our Blog A week in Pensacola

A week in Pensacola

12/6-12/2014  Summary:  We arrived mid-afternoon in Pensacola, rented a car, and headed for the boat. It looked just like we left it, so we headed out to McGuire’s Irish Pub. McGuire’s is huge! It’s a 615-seat restaurant the size of a football field (minus the end zones) that has been in business for 37 years, with more than 1.5 million signed dollar bills hanging from the ceiling. It was quite crowded and noisy with a bagpiper who walked around playing, in this case, Christmas carols. The food was okay, but the atmosphere was worth the visit.

12/7/14 – We attended Coastline Calvary Chapel – friendly with nice (and not-too-loud) worship and a good message. Then we drove out to Santa Rosa Island, an island between Pensacola Bay and the Gulf, which we had been told would be a pretty drive on a nice day (and it was pretty, but cool and windy). The visitor center’s host said one of her favorite restaurants was Peg Leg Pete’s Oyster Bar, and we both had the grouper sandwich, which Tom thought was the best one he had ever had. Definitely a “locals” place, with many families and a place we’ll return for sure! Plus they have a small marina, so you can dock and eat. 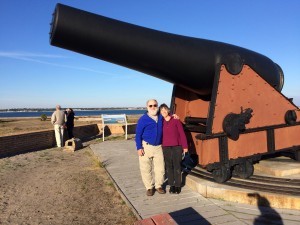 From Peg Leg’s, we headed west and toured Ft. Pickens, the largest of 4 forts built to defend Pensacola Bay and its naval yard. It was built in 1829, remained in use until 1949, and was one of only 4 forts in the South never occupied by Confederate forces during the Civil War. Captives from Indian Wars in the West were transported to the East Coast to be held as prisoners in St. Augustine and in 1886, Geronimo, Apache war chief, was imprisoned instead at Fort Pickens. Pensacola wanted him kept at Ft Pickens as a major tourist attraction – he once attracted 459 tourists in 1 day. He learned to sign his name and would do so for 25¢ or a cigar.

We finished the day at Western FL University’s free Symphonic Band Holiday Concert. It was very good, starting off with one of our favorites, Sleigh Ride by Leroy Anderson. There was also a tribute to Pearl Harbor, as this was the 73rd anniversary of the attack and all flags were at half-staff.

12/08/14 – We awoke to an overcast and cool day. We did a few things on the boat, discovering we liked our salon windows (with blinds) better curtain-less. Then Paula wondered aloud if the trawler material Tom found at Savers would look good as curtains. So, we decided if there was enough material, Paula would make new curtains to replace the remaining 4 green and blue curtains. (Oh boy, another job for Paula.)

Lunch was at a food court area downtown, corner of Main St. and Palafox St., where there were 4 Airstream trailers converted into take-out diners, with a courtyard for eating. We had delicious sandwiches.

We were then off to the Pensacola Naval Air Station and an afternoon at the Naval Air Museum (free). Besides walking around looking at the airplanes, we viewed the Blue Angels IMAX video and then Paula (with Tom) flew in the F-16 full motion simulator. It was quite sensitive and lots of fun!!! ($20 for both of us for 4 minutes.) She did several snap rolls (which Tom says weren’t too snappy), and was in the middle of a loop when her time ran out.

Pensacola Lighthouse was our next stop, right across the street from the museum. We walked up the 177 steps to the top, getting to the top in time to watch a great sunset with a terrific view of the Gulf!  Very fun day!

12/9/14 – We got up and did a few chores around the boat before taking Paula back to the Naval Air Museum. She got there at 9:15, and didn’t leave until 2:15 and had a great time. Tom ran errands the whole time she was there, like going to the tax collector’s office to register the boat in Florida for the next year, and get a fishing license – including a lobster tag.

After picking Paula up at the museum, we had lunch at Joe’s Fish Market. It was an interesting place with a 60-foot counter with all kinds of fresh fish. We picked up some great crab cakes for supper.

12/10, 11/14 – We hardly left the marina the next 2 days. Instead of sightseeing, we worked on polishing off some of the items on “the list,” like taking a full inventory of the engine-room spares, marking the circuit breaker panel, cleaning heat exchangers and sea water strainers, fixing mini-blinds, and measuring for new curtains.

Up early the next morning to catch a 7:00 AM flight (which we missed but got the next one…should have slept in!). But we got enough done so we are ready to leave Pensacola in mid-January.