St. Peter’s Church in the Rock

On July 18, we drove the 120 miles to Toronto to catch our flight to NC for Paula’s Dad’s 102nd birthday party. Unfortunately, many flights were canceled due to thunderstorms in Chicago and on the East Coast. There were hundreds of scouts stranded in the airport bound for an international scout jamboree in VW. Flying standby and only getting on if there were open seats, we missed flights to Charlotte, Miami, and Philadelphia. We found a hotel nearby and got up at 2:15 the next morning and finally caught a flight to Charlotte.

Dad’s party was a rousing success, with about 100 friends in attendance. He was honored (after which he was ready for a good nap)! Mom, though nearly blind, played Happy Birthday on the piano. We were glad to see Dad looking so well, but Mom’s health, at age 98, seemed to be declining. They both wanted to leave this world to be with Jesus. The event made the local news though!  See the KXII 12 News report – Veteran celebrates 102nd birthday. 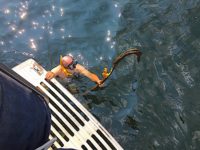 After returning to Canada, we left Port of Orillia with Terry and Marge on July 25 at 7:15 AM. They had joined us for a week during our first Great Loop on the Tennessee-Tom River in 2016. With a few locks under their belts from their first trip, we gave them lots more practice enroute to Balsam Lake with 6 locks their first day. We passed several boats we knew during the day, and finally crossed paths with Tim and June Sneider on Subject to Change who we met at the DeFever Rendezvous in mid-May, stopping on the lock wall to talk with them a bit. Then it was on through the narrow Trent Canal. We once again hit several deadheads (floating logs), and by the time we arrived on Balsam Lake, we had an abnormal noise and vibration. Uh-oh. Time for Tom to go swimming. Look what he found [picture right]! The shepherd’s crook bend of a large stick had caught around our drive shaft and the prop had been chipping away at it. It was cut almost 75% through! As soon as it was removed, the noise and vibration were gone. We continued across the lake to an unmarked anchorage. After a cool swim and a game of Qwirkle (which we had taught them on their previous trip and they subsequently bought their own game), we enjoyed dinner on the aft deck.

We didn’t leave until almost 10:00 the next morning, hoping boats would leave spaces on the wall with power at Fenelon Falls before we journeyed the 5 miles enroute. The plan worked and we got a spot. We enjoyed lunch at a Chinese restaurant Sun Ming, bringing home loads of leftovers. We caught lines for United 771, who we had met in Cape May, NJ. Later, when they got ready to leave, we were there to say goodbye. Unfortunately, Steve could only get one engine started. Tom helped troubleshoot while Terry, Marge, and Paula rode the Victoria Rail Trail. It was a relaxing afternoon of games after Terry and Marge explored the town and then we enjoyed sunset from the bridge. (Unfortunately, we later learned United 771 was down for over a week with repairs. But, it’s a boat…and those things happen.)

It was only 15 miles to the next lock, Bobcaygeon. We had passed it by on our way to Port of Orillia, as we wanted to stop with Terry and Marge. Bigley Shoes, with its 70,000 pairs, was something not to be missed. But we had to plan this right. It was a popular stop (and right in rental boat territory) with power only below the lock on one side. We left at 9:00, hoping the timing would work outright.

On Sturgeon Lake, we came upon a small disabled pleasure craft bobbing in the water. We turned around and came alongside. We met Peter and Kim who were enroute to meet family in Fenelon Falls for the day. Their engine had stopped and Peter could not get it started again. After rafting together, Tom climbed aboard to take a look. The engine was getting fuel but no spark. Eventually, Tom found a broken coil wire and with tool kit in hand, he “MacGyvered” it back together to get the engine running again. (MacGyver was a TV show in the ’80s in which MacGyver had genius-level intellect and could fix any problem. Often Tom is accused of being a “MacGyver,” with ingenious solutions to problems.) After getting help from a mechanic obtained by Harbor Host Pam in Fenelon Falls, we got a text from them thanking us for our help and saying the mechanic told them they “were lucky to run across [us] as he had never seen such an idea to attach the wire back.” Tom replied he’d never seen anything like that either! Marge and Paula mused maybe it was God’s way of slowing us down – that we might have been getting to Bobcaygeon too early! 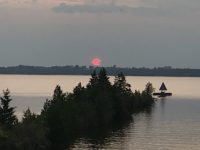 But, when we arrived, there were no spots on the power wall.  So, instead, we snuck into a spot on the upper wall after a boat pulled off. We showed Terry and Marge the town and walked to Kawartha Dairies to use our BOGO coupon from Pam for ice cream. All day, we kept checking the lower wall for space with power. Finally, just in time to get through the lock before it closed for the day, a local boater stayed long enough for us to lock through and take his space.

In the morning, we walked the short distance to Trentside Baptist, recommended by Pam, and met Pastor Jeff. It was an enjoyable service, the end of a week of Vacation Bible School for the kids. The church was committed to children and, we later learned, was the only church in either Bobcaygeon and Fenelon Falls with programs for children! Amazing.

When we arrived at Buckhorn, we got a spot with power only because a small boat that had just pulled in offered to let us have her space if she could raft to us for a little while. We readily agreed! It turned out not to be necessary as there was room for her to squeeze back to the wall behind us. Paula later found it humorous to be giving her information about the Trent-Severn Waterway’s good places to stop. It appeared we had traveled it enough to finally know more than someone else! 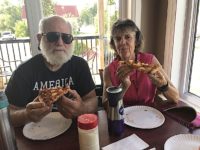 The afternoon was consumed with pizza, ice cream, and games. Terry said we were somehow changing the tiles after drawing them out because he never won. We met one Looper who wasn’t flying the Great Loop flag, the recognizable way to know other Loopers. That was a first for us. Seemed he was a loner who didn’t really want to socialize with others! His loss; it was a really good way to learn important information. 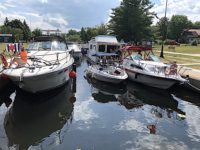 Monday, we began the day not sure of how far we could get, with afternoon thunderstorms in the forecast. But we cruised 26 miles through 8 locks to overnight at Nassau Mills, a lock wall at which we had never stayed and our original goal for the day.

It was time to begin positioning ourselves for Terry and Marge’s departure. The sky changed from scattered to overcast as the wind picked up to about 10-12 mph through the windiest lock on the Trent-Severn Waterway, Douro. But we never got rain and there was only one other small boat with its occupants camping alongside at Nassau Mills when we tied up there the next day at 3:45 PM. It had been very hot and we cooled off with a swim behind the boat. It eventually rained overnight. 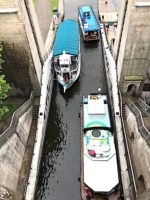 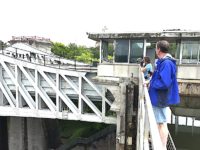 There was only the Nassau Mills lock left for Terry and Marge to traverse. Afterward, we stopped before the Peterborough Lift Lock and got a wonderful tour of the control room from Lockmaster Rob. The valves for the lock were still original from 1904 but now controlled electronically instead of manually. For example, the main valve, originally controlled by a bicycle chain and hand-cranked from the top of the 65’ center tower, was now controlled by the push of a button. Marge and Paula got to push the buttons to lock up 3 boats. Then, Terry and Marge enjoyed the lift lock’s museum while awaiting their pick-up from Enterprise to go retrieve their car in Port of Orillia.

We lowered our scooter to play in Peterborough while they were gone. Most of our time was taken up with jumpstarting our scooter (3 times) and buying a new scooter battery and solar panel to prevent battery discharge in the future, though we did have time for a delicious lunch at Rileys, recommended by 2 locals. Combining BBQ in unusual ways seemed to be a favorite cuisine art of Canadians. Paula had previously enjoyed mac and cheese with BBQ at Mariposa Market in Orillia. This time, it was a cheese sandwich with BBQ pork. Delicious!

We waved Terry and Marge goodbye the next morning as they began their 12-hour drive back to KY, having enjoyed our time together. They were some of our lowest-maintenance guests. Marge was so helpful and Terry did the dishes every night. Paula was sure going to miss that! 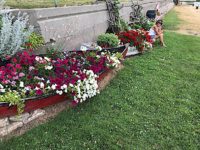 Our starboard starter battery let us down, and Tom had to redirect it to the house battery before we could get going the next morning. After finishing the 3 locks for the day, we tried to anchor on Rice Lake but the bottom was rock and our anchor would not hold. Sadly, we gave up and went to the Hastings Lock for the night.  But we met Michael and sister, Patricia, on a 22’ C-Dory on the wall. It was a really cute, small boat (half the length of ours), his named appropriately, The Flying Scotsman. Previously we had never seen this make of boat, but oddly, had come across 3 of them in the previous 3 days, all traveling independently. We had a wonderful conversation with them, with Michael telling us about his trip into the Grand Canyon on the back of a mule. He asked if we were religious (which his sister later said she had never heard him ask anyone before) and, though a non-believer in Jesus Christ, said he certainly “saw” God in the canyon. Tom subsequently shared his story of rafting in the canyon for over 30 years, along with his testimony of receiving Christ, and gifted them with his book, Grand Canyon, a Different View, which they really seemed to appreciate. We prayed the book might be one more link in his journey to come to know Jesus as his Savior, the most important decision either of us ever made.

We enjoyed the cooler weather (high of only 81) after about 2 weeks of uncommonly warm temps (and high humidity), and later that evening, caught lines for Southern Cross as they pulled over to dock. We hadn’t seen Dave and Penny since the night in Annapolis when they had 24 Loopers on their boat for a docktail party. Sadly, Penny wasn’t enjoying the Trent-Severn and couldn’t wait to be finished with the locks and enjoy the peace of anchoring in the Georgian Bay.

In 3 more days, we were finished with the Trent-Severn, stopping each night at the same places we previously stopped (just because they were conveniently spaced). At Healy Falls lock, we got to tour the power station and then the lockmaster gave us a photo of the original construction of the lock. We spent one night at the Trent Port Marina after exiting Lock 1, taking advantage of their free laundry machines before our planned departure to the Thousand Islands, NE of Lake Ontario. We had never been there before and we were looking forward to it!