After leaving the New York Harbor and the amazing experience of being the only boat moving on the water (see our last blog), we headed north up the Hudson River. On our first loop, we took several days to explore along the way, but this time we needed to meet our good friends Jeff and Gloria in Albany a few days hence. So, we powered up the Hudson, against the current. We spent one night on the hook anchoring behind Esopus Island (not one of our most scenic anchorages) and were tied up in Albany Yacht Club marina two days later when Jeff and Gloria arrived. They had arranged their schedule so they could help us deal with the locks on the Erie Canal. After doing some provisioning, we were ready to attack the Erie! 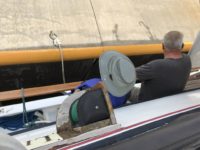 The locks on the Erie, in our opinion, were by far the worst locks on the entire Loop! The walls were yucky with growth, some had cables connected at the top and bottom, or pipes you could connect to as your boat went up or down. But most just had a rope hanging over the side to grab. So sometimes you were in the chamber 30’ down holding onto a rope going straight up. Then the lockmaster started letting the water into the chamber, which created a swirling current that pushed the boat around. If the lockmaster was nice and let the water in slowly, it wasn’t a big deal. But if too much water came in at once, it pushed the boat all over the place. 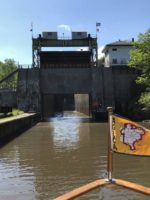 Jeff is a big strong guy and Tom can generally hold his own, but our boat weighs 44,000 pounds and in two locks (one of which is at right and was the highest lock on the Erie Canal, Little Falls), the current in the lock pushed the boat so hard they could not hold on, had to let go of their ropes, and grab new lines on the opposite side of the wall after the boat was pushed about 30 feet across the lock. Fortunately, we were the only boat in the lock, had bumper balls on both sides, and they could grab ropes on the other side without us hitting anything. 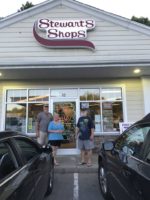 The Erie was a combination of canals, rivers, and lakes with locks to adjust for the change in elevation. Along the way were many cute towns, some of which had docks to which you can tie, normally for a fee. (For a more detailed description of the Erie Canal, see our blog from our first Loop.) We took advantage of many of those as we spent 5 days passing through 36 locks on the 185 miles of the eastern Erie and Oswego Canals. Along the way, we did some touring of the small towns adjacent to the canal, including visiting the reconstructed Stanwix Fort (originally built by the British in the early 1800s), saw a couple of car shows, and of course, checked out a few ice cream shops along the way! (We really liked Stewart’s ice cream shops.) Below are some of the pictures from our journey. 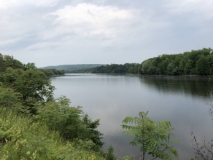 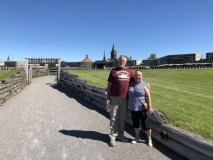 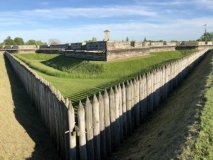 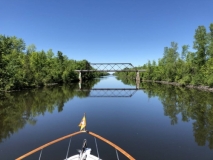 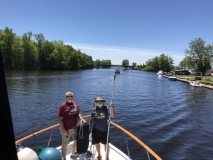 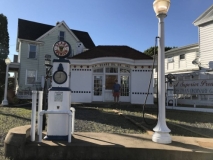 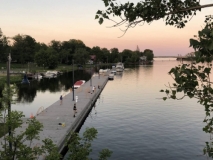 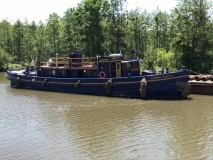 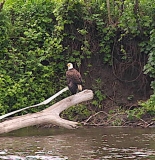 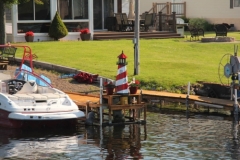 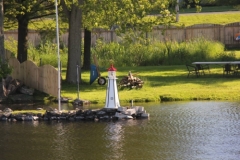 Due to the very high water this year, many of the docks were underwater, closing some of the marinas. But we were able to secure a slip at the Oswego Marina, the same marina we used on our first Great Loop. The next day we rented a car, took Jeff and Gloria to the airport, and did some supply shopping on the way back.  The wind was whipping up big waves on Lake Ontario which caused us to wait 3 days for good weather to cross from Oswego to Kingston, Canada. We finally crossed on Wednesday, June 11 on near-perfect lake conditions. 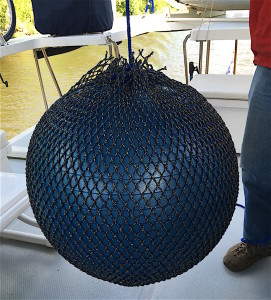 No sooner had we pulled out of Oswego Marina than we discovered 1 of our 4 exercise ball bumpers we used in the locks was AWOL. We turned back to the marina, calling the marina enroute to see if it had been found somewhere. Surely no one had stolen it off our boat! It was not expensive but it was a valuable possession. We lost one on our first Loop when a wall ripped it off our boat and had to replace it. We didn’t want to have to do it again! The dock master was kind enough to circle the marina in her golf cart and found it floating at the end of the fairway. We pulled up to the fuel dock, got the handoff, and were on our way to the lake again.

We called customs enroute over the phone while on the lake. When Tom gave them his passport number, their first questions was “Is Paula with you?” as they had our records from our first Loop. It was so easy and, after answering a few questions (cigarettes, food, etc.), we were approved for entry and given our customs number to post on the boat.

Not having had time to plan ahead due to the weather uncertainty, we began trying to find a marina in which to stay in Kingston. We called Kingston Marina – full. We called Confederation Basin and were told we had to make reservations 48 hours in advance. Too late for that! They did say available slips were first come, first served and said we could call when we got closer to see if they had anything available. When we asked if there were available slips right then, they said they didn’t know!  We decided to call back and make a reservation for 48 hours out but found it wasn’t really 48 hours but 2 calendar days, which was really 3days later. When we asked about the cancellation policy, we were told it was 72 hours! What a screwy system. Few boaters know with certainty 72 hours out where they will be. Weather, lock delays, or boat breakdowns change plans fast. 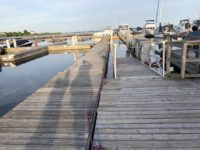 We found an anchorage as a backup and decided to continue, call the marina when we were 10 minutes out, and hope for the best. When we called, we were immediately given a slip assignment, and when we arrived, there were many empty slips. What a terrible system. We felt sure they lost business because many boaters would just make other plans rather than take a chance. (We actually got to voice our perspective to the marina manager several days later.) When we arrived we found many of their docks were underwater due to the high lake level.

As we proceeded toward Kingston, we entered the Thousand Islands. It is an archipelago of almost 2,000 islands 50 miles long from Kingston along the St. Lawrence Seaway, bordering both Canada and the US. Paula found a book called, One in a Thousand by Ian Coristine with gorgeous pictures of the area. Enjoy this video of some of his photography! 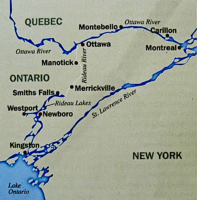 Kingston is in Eastern Ontario, Canada. It is on the eastern end of Lake Ontario at the beginning of the St. Lawrence River and at the mouth of the Cataraqui River (at the south end of the Rideau Canal). We wanted to go through the Thousand Islands NE on the St. Lawrence River to Montreal, rent a car or take a train to Quebec City, take the Ottawa River west, and return south to Kingston through the Rideau Canal. However, Lake Ontario was above normal water levels, resulting in above normal amounts of water being released into the St. Lawrence River, and the St. Lawrence was above safe water levels even for commercial vessels. Didn’t sound like a recipe for safe boating for us! So, we altered our plans and decided to begin in the clockwise direction instead and see if the St. Lawrence would subside to safe levels in a couple of weeks. Life’s TraVails only travels 7 knots and returning by the St. Lawrence, we could be going against a current of up to 6 knots. We certainly weren’t doing that! Eventually, we decided we’d do an out-and-back on the Rideau.

Lunch with John and Nancy

Enroute, we passed 86 wind turbines on Wolfe Island on our starboard (enough to supply power to 75,000 houses we later learned on a tour), with Simcoe Island on our port. The entrance through Boat Channel was beautiful.  After docking, we met John and Nancy at the office and decided to have dinner together so we could pick John’s brain. (He had done the Rideau Canal previously.) Interestingly, John’s wife hadn’t wanted to do the Great Loop and Nancy wanted to do the Loop but didn’t have a boat. They got together through the AGLCA (America’s Great Loop Cruisers Association) and were just beginning their adventure. (We later learned, their Loop ended after about a month, but were told it wasn’t that they weren’t getting along.) We had a delicious dinner at Casa, an Italian restaurant just blocks from the marina. Checking the weather upon our return, we were saddened to see a forecast of rain for 4 days followed by 2 overcast days and then 4 more days of rain. But the happy news was the exchange rate. $1.00 Canadian only cost us 75¢US (so essentially, everything in Canada was 25% cheaper). 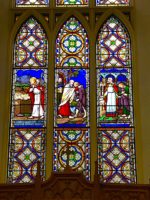 The rain began overnight and was intermittent in the morning when we got up. We visited the Kingston Public Market in the square. It was the oldest continuously operating market in Ontario, beginning in 1801. The rain and wind started again and many of the merchants packed up, knowing there would not be much business for the day. We did the Kingston Trolley Tour, a 75-minute hop-on hop-off tour around Kingston with 7 stops, good for 24 hours, and learned so much about the city. We saw the Royal Military College of CA (RMA), the Penitentiary and Museum, Queens University, St. Mary’s (with beautiful stained-glass windows) and St. George’s churches as well as the shopping and restaurant district. Click here for some interesting facts about Kingston.

Our first stop was the Royal Military College of CA (RMA). The trolley actually went right through the academy (but no pictures were allowed). Then we went up the hill to Fort Henry, a fort built by the British because of tensions with the US. (Though Canada is an independent country, Britain’s queen remains the nations’ head of state.) We saw several martellos, round defense fortifications, around town. 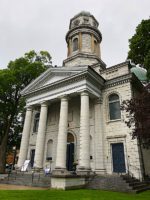 Kingston was also the home of the first large federal penitentiary and we visited the Penitentiary Museum in the former warden’s house and saw the archaic “tools of the trade,” contraband, instruments of torture, prison cells, and read information on the inmates. At one time, 500 inmates were housed there. Until 2000, Kingston had the only correctional facility for women.

Also while in Kingston, we attended a free piano duo concert by 2 Russian female pianists (Peletsis and Dardykina) at St. George’s Cathedral, an Anglican Church. They were so perfectly together.

More than anything, we waited out the weather for days. After 3 days of rain, we were anxious to move on. Next…the Rideau Canal. 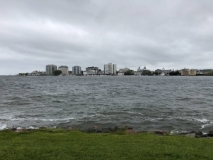 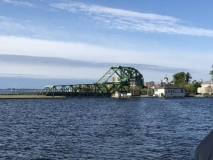 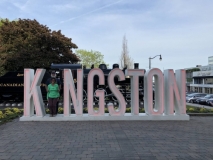 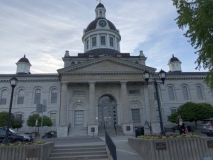 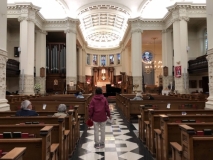 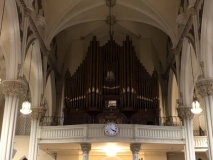 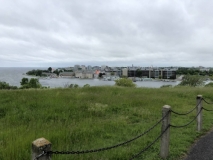 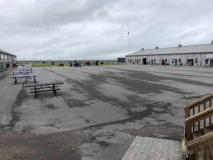 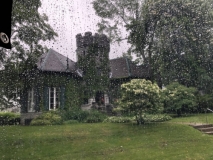 Kingston, known as “the Limestone city” was a city of many “firsts.”

In 1840, a fire burned 70% (or 25%, or half; take your pick; we heard all 3 numbers) of the city’s wooden buildings in 24 hours. It started on a cargo boat and then moved to a warehouse housing over 70 kegs of gunpowder. The resulting explosion spread to the city’s downtown area and destroyed many buildings, including city hall. After the fire, buildings were constructed from blue limestone on which the city sat. Most of the buildings pictured were constructed in the years just after the fire. Modern construction certainly won’t last this well! 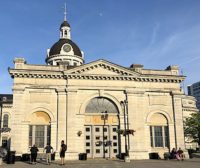 Interestingly, Canada became a nation in 1867 but did not have a national flag until 1965! Though Ottawa is now the capital of Ontario, Kingston was its first capital (with several other cities holding the title temporarily). The town hall was not even completed before the capital was moved. We toured the town hall, a beautiful limestone structure. The parliament room, with a gorgeous chandelier purchased in 1973 to commemorate the 300th year of European settlement, had 373 bulbs and looked to us like a fireworks explosion. 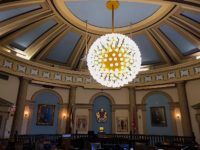