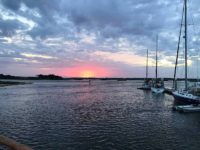 We had done some math before leaving Miami on March 30th and figured out to hit the Erie Canal by June 1, we needed to do an average of 25 miles per day. The canal closes during the winter and reopens in mid-May. Early June allowed a bit of time for the debris to wash out prior to our entering. Tom created a spreadsheet to keep track of our progress. By entering how far we traveled each day, we could predict what day we would get to the Erie as well as how many miles ahead or behind we were.

But if we only did 25 miles per day, that would leave no time for weather delays or stopping to sightsee, so we concentrated on building some buffer by doing more than 25 miles per day. We departed Ft. Pierce at 7:35 AM for a l-o-n-g day of 81 miles. We average about 7 MPH, so that took us over 11 hours. We really don’t enjoy that long a day. Fortunately, we didn’t have any bridges that needed to be opened for us, which could cause additional delays.

There were waves of 1 to 1.5 feet until we got north of the Vero Beach Bridge, then it was much calmer with protection by land from the east wind until it built up again later in the day. It was much cooler and was the first day we didn’t open any of the windows on the flybridge and wore sweatshirts with our shorts.

We had a wonderful anchorage for the night. We stopped just south of the NASA Causeway Bridge, and with the wind still blowing out of the east, we looked directly toward the launch pad at Kennedy Space Center with a missile set up on it (pictured above). If only there had been a launch that night, we would have had a primo viewing location!  But alas, one did not take place until we were 50 miles north in Daytona. But more about that later.

Tom found it necessary to make 2 repairs after we anchored (a leaking dinghy fuel line and the generator raw water pump), and we didn’t get dinner until 9:15 PM. A light meal of soup after the cooler day was perfect.

What wasn’t perfect was the call at 9:30 PM that Paula’s 98-year-old mom, Naomi, had fallen and not been able to get up and was enroute to the hospital. We made plans to get to a marina the next night so Paula could fly to NC. Naomi had broken her hip and had surgery the next day to insert a rod and screws so she would be more comfortable. 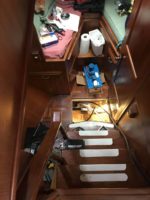 Paula went to be with her parents (Dad, almost 102) for a week while Tom stayed on the boat to work. It was a tough week for Paula; after spending about 6 days in the hospital, her mom was able to transfer to the nursing section of their retirement community for continued healing and rehab. Meanwhile, Tom didn’t enjoy spending 4 days working on the heads (toilets) much either, especially since when it was all said and done, one of them still did not work.

Tom surprised Paula by greeting her at the airport when she returned. He was on the scooter, so he put her suitcase in front between his legs and we scootered our way to the boat. That evening we enjoyed a delicious Italian dinner on the patio at Zappi’s Italian Restaurant. We amused ourselves over salad watching 2 lizards fight several territorial battles. The little one was the aggressor, but the big one seemed a bit smarter. (Obviously,  it doesn’t take too much to amuse us!)

As we left the restaurant, we saw a crowd of people gathered on the sidewalk looking up into the sky. It was the launch of the SpaceX Falcon Heavy Arabsat 6A rocket from Kennedy Space Center 50 miles to our south! We could see it!  And maybe a minute or 2 after it took off, we could hear the roar. Several minutes later, we heard 2 sonic booms as 2 booster rockets reentered the atmosphere and watched on someone’s phone as it was guided back to an upright landing on a launch pad at the space center!  It was amazing. 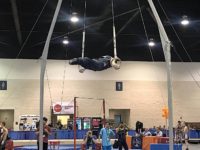 Paula, having been a college gymnast, was interested in going to the NAIGC Nationals (club gymnastics) at the Beach Center Convention Center. A team from Pittsburg had been on her flight to Daytona the previous day. There were 1,500 gymnasts from 111 clubs from all over the country, with both men’s and women’s competitions going on at the same time. Never had we seen so much gymnastics equipment in one place at one time. The level of gymnastics ranged from rather low (Paula commented a few times she had done that particular move we were seeing when she was in college almost 40 years ago) to quite good and we enjoyed some time watching.

At 7:10 AM on April 12, we were ready to leave Daytona. The wind was higher than forecast at about 10 knots. Several neighboring boaters offered help with our lines and as always, we accepted. When final instructions were given, Tom went to the bow and Paula to the flybridge. One of the guys helping said to Tom, “Don’t you need to go up and drive?”  Tom told him, “No, she is.”  Tom later told Paula he wished she’d seen how his jaw dropped. When Tom told him Paula used to fly a 757, his wife had to tell him what that was. It’s always a little fun to surprise folks. (For those of you who haven’t followed our blog very long, HERE is how that started.)

We had a beautiful, warm, sunny day enroute to St. Augustine, with pretty houses along the way. The wind continued to increase to about 14 knots. We had docked at Rivers Edge Marina in St. Augustine before and knew it to be a tight marina. In order to get fuel, we had to go deep into the alley between 2 piers alongside the fuel dock. Fortunately, the wind blew us toward the dock and with some help, we got tied up. Dockmaster, Paul, allowed us to stay there rather than trying to battle the winds to move to the slip he had assigned us.

We lowered the scooter to drive through town and visit our favorite restaurant from the previous Loop. We enjoyed Ichiban, a buffet with hot foods and wonderful sushi. Once again, it was a treat. St. Augustine is a beautiful town, very historic, with much to offer. But having been there before for about 10 days, we decided not to stay long this time.

Just as the sun was setting, Tow Boat US towed a disabled 34’ trawler in and docked it right in front of us, limiting our space for departure the next morning. The tow captain did an amazing job of docking the disabled boat even though he was on the side where he couldn’t see the dock. Several of us talked him through it, giving him distances. Tom and others helped catch lines and afterward, Tom helped owner Bob troubleshoot the engine to see if they could find out why his engine had quit, but to no avail.

When we awoke in the morning, the wind had subsided some but was still blowing from the SW pushing us toward the dock. But Dockmaster Paul came in early and 3 others on the dock offered their assistance with lines for our departure. It went better than expected! Thank you, Lord.

St. Augustine from the water 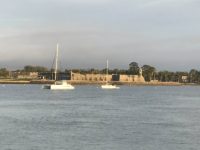 After navigating the strong currents of St. Augustine (there are several rivers that fill up when the tide rises and then change direction as it ebbs), we passed downtown St. Augustine and could see Flagler College, Castillo de San Marcos Fort, and many moored boats. Then there were miles of rather boring salt grass marshes before we got to Vilano Beach. As we navigated through the ICW (Intracoastal Waterway), here only about 100 yards wide, there were again beautiful houses at which to gander. Though beautiful, they were smaller and more reasonable than many of the multi-million-dollar ones we had seen up to this point, some we might have even been able to afford! (Be sure to click on each one to make it bigger for better viewing.) 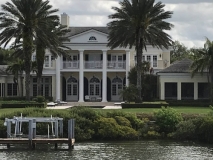 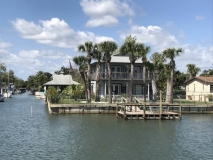 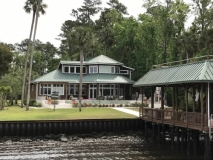 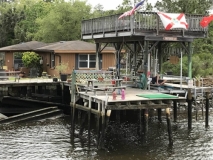 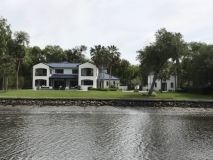 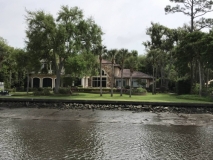 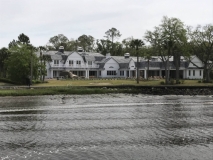 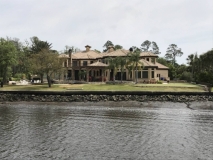 We love free. And Jacksonville had a small free city dock, the Jim King Courtesy dock. It was located on 3 Sisters River and we knew from our previous docking there, it could have strong currents. A sailboat we had followed all the way from St. Augustine arrived at the dock about 10 minutes before we arrived, leaving only 1 space. When they saw we were wanting the space behind them, they pulled their sailboat up, leaving us a bit more room at the end of the dock. The current and wind tried to keep us away from the dock, but we maneuvered in and they were there to catch our lines and help us tie up. We’re always glad for helping hands and call them our “dock angels.”  Docking there would be extremely difficult without someone to catch lines.

We later met “our angels.” Richard and Melanie on LIUNAtic were from Providence, RI but had no dirt now. (That’s boater talk for boaters who don’t own a home on land.)  We enjoyed talking with them and Melanie was excited when Paula asked her if she’d like some of our fresh basil. Our basil plant is the only live thing we have aboard (besides us) and we really enjoy the flavor it adds to many dishes. 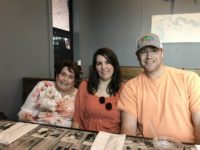 Paula’s Aunt Robbie lived in Jacksonville and we were very happy she could come to see us. She brought her granddaughter, Jaime, and her husband, Steven, with her and we all had a wonderful time visiting on the boat and then ate dinner at Palms Fish Camp. They kindly took us to the grocery store afterward so Tom would not have withdrawals without bananas and we could get some salad fixings, a common boat lunch for us. The sunset that evening was stupendous! 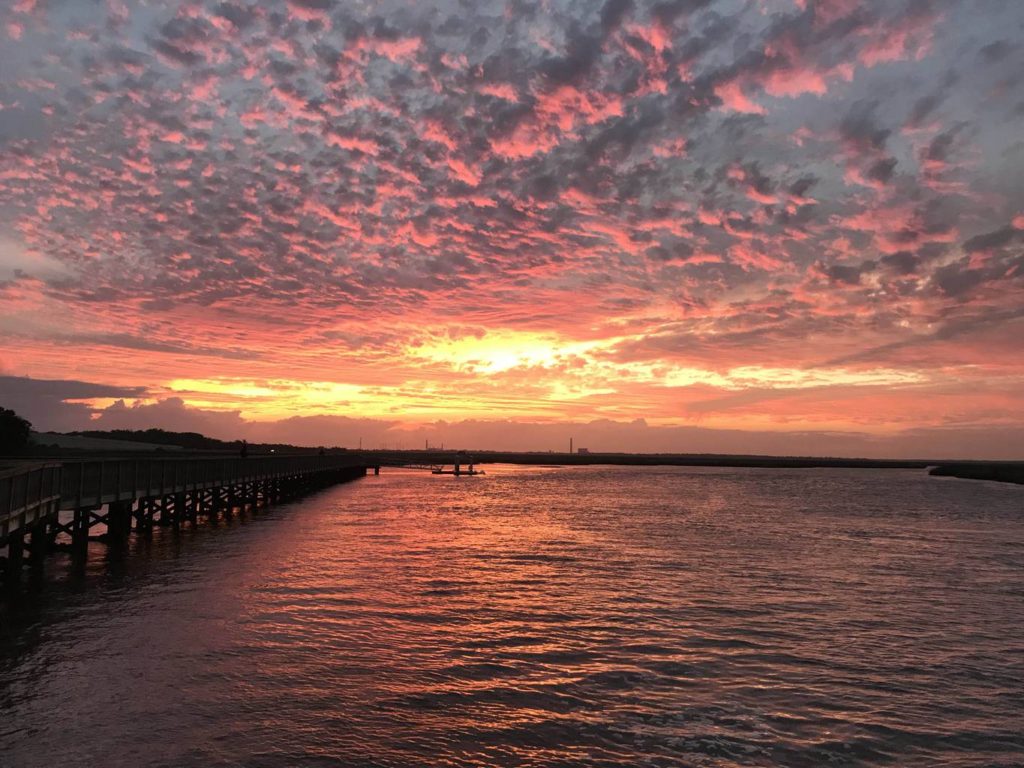 Along the way, we enjoyed many birds, some of which followed the boat for miles looking for scraps we kicked up in our wake. Below are just a few of them. 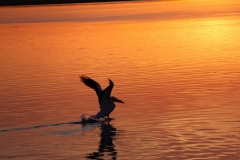 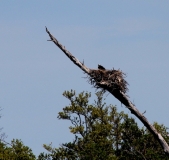 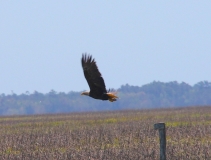 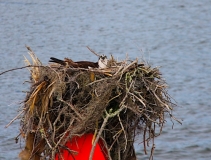 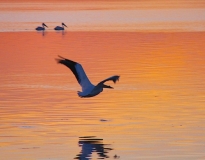 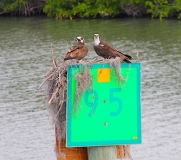 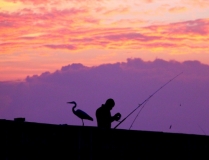 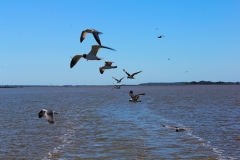 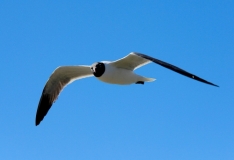 Slack tide occurred at 6:00 AM the next morning. Slack tide occurs when the tide is changing at high or low tide, leaving it basically motionless for a short period as it changes directions.  That is the best time to dock or depart. The tide in 3 Sisters River can run as high as 6 knots. Under power, Life’s TraVails only does 7 to 8 knots, so you can see how important tides can be, often more important than the wind. With Richard’s help again, we sterned (backed) away from the dock into the current until there was room to start pulling forward into the river. We had learned our lesson from our first time here when Paula thought we were inches from hitting another boat as the current drove us toward them. Always maneuver against the current! It is just like an airplane which always takes off and lands into the wind. There is more control with opposing forces.

So, at this point, we were a few days ahead according to our spreadsheet, but we planned to spend a couple of them at our next stop – Jekyll, GA.

On our first Loop, we started off with Tom doing all the docking. When we got to Ft Pierce, we met Lorenzo Johnson, a Coast Guard instructor whose opinion was that for a male-female team, the woman should drive the boat while the man, generally the stronger of the two, should handle the lines. Lorenzo taught Paula to dock and after that, that’s how we did things. It raised a few eyebrows along the way, only of course because it isn’t commonly seen. It is sort of like female airline pilots.  She raised a few eyebrows then too.