Back on the Boat – Fort Myers to Key West

At Anchor in Snake River, Everglades

We are back on the boat! After 20 months of being off the boat due to Paula's health issues , we once again returned to Fort Myers to restart our second Great Loop. Our journey would start by heading south past the Everglades toward Key West, new territory for us since on our first Loop, we cut across Florida through the Okeechobee Waterway.

As you might imagine, a boat neglected that long needed lots of TLC before asking service of it! So, for 2 weeks, we replaced stuff, scrubbed, power washed, had the scooter serviced, the dinghy motor fixed, and a few hundred “little” things from the list until we felt everything essential was finally ready for departure. The first leg would be only a 4-hour motor to Ding Darling State Park, directly west of Fort Myers, a place we had anchored twice before and knew pretty well. This “shakedown cruise” was short so we could return if we had any problems. 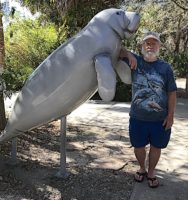 Monday, Feb 25, was our planned departure date, but the weather didn’t give us the warm fuzzies. It was about 15 knots by 8:00 AM with thunderstorms forecast for the following afternoon. With a rather tight marina, Paula, having not driven for so long, wanted more favorable departure conditions. So, we delayed another 2 days to wait for weather more to our liking and it gave us more time to work on the list, like treating the teak on the aft deck. In all, we completed over 50 tasks. We did take one break and took our kayak to Manatee Park to paddle with the manatees, but even though we had seen several of them there before, the only one we saw this time asked to pose for a picture with Tom.

During our time in Ft. Myers, we met two very friendly couples. The first was Larry and Sally Carr, Fort Myers seasonals from upstate NY. We were both waiting for seating at Rib City and struck up a conversation, followed by an invitation from Larry to dine together. After Tom offered a thanksgiving blessing to God for dinner, they invited us to church and Sunday school class with them the following morning. So, we attended New Hope Evangelical Presbyterian Church the next 2 Sundays and enjoyed it. We hope to see Larry and Sally again in Oswego when we get north this summer.

The other couple we met were live-aboards on a Carver 36’ named Defiance in our marina. Mark and Karen, also believers raised Mennonite, were truckers from Elkhart, IN, who had raised 9 children (5 by birth and 4 adopted siblings). Mark still drove actively so we only got to see him for a short time, but Karen was staying the winter in Fort Myers. She said she’d never met a female pilot and I said I’d never known a female trucker. Fun folks and we laughed a lot together over 2 meals before we left Fort Myers. They helped us loose our lines on departure and Karen prayed for our journey. Sweet!

On Wednesday, Feb 27, 2019, exactly 20 months plus 21 days since parking the boat at Sweetwater Landing Marina, we headed out for Sanibel Island. As we cleared the marina, Tom discovered all our bumpers were a mess from sitting so long and the foredeck looked a wreck until we got to Key West to clean them.

The first day was a short one to ensure all systems were working. Most everything did and what didn’t, Tom was able to fix. After anchoring in Ding Darling State Park, we lowered the dinghy, inflated the tandem kayak, and paddled the 3-mile kayak trail. It is a “lollipop” route (enter, do a loop, then exit the entrance). A small current allowed us to just float in for a while. We saw many birds, some fish (both in and out of the water), some crazy humankind ahead of us disturbing the wildlife, thus not much else. The forecasted rainstorm came after we had everything once again secured on Life’s TraVails and were indoors until the sky cleared, after which we watched a beautiful sunset from the aft deck. 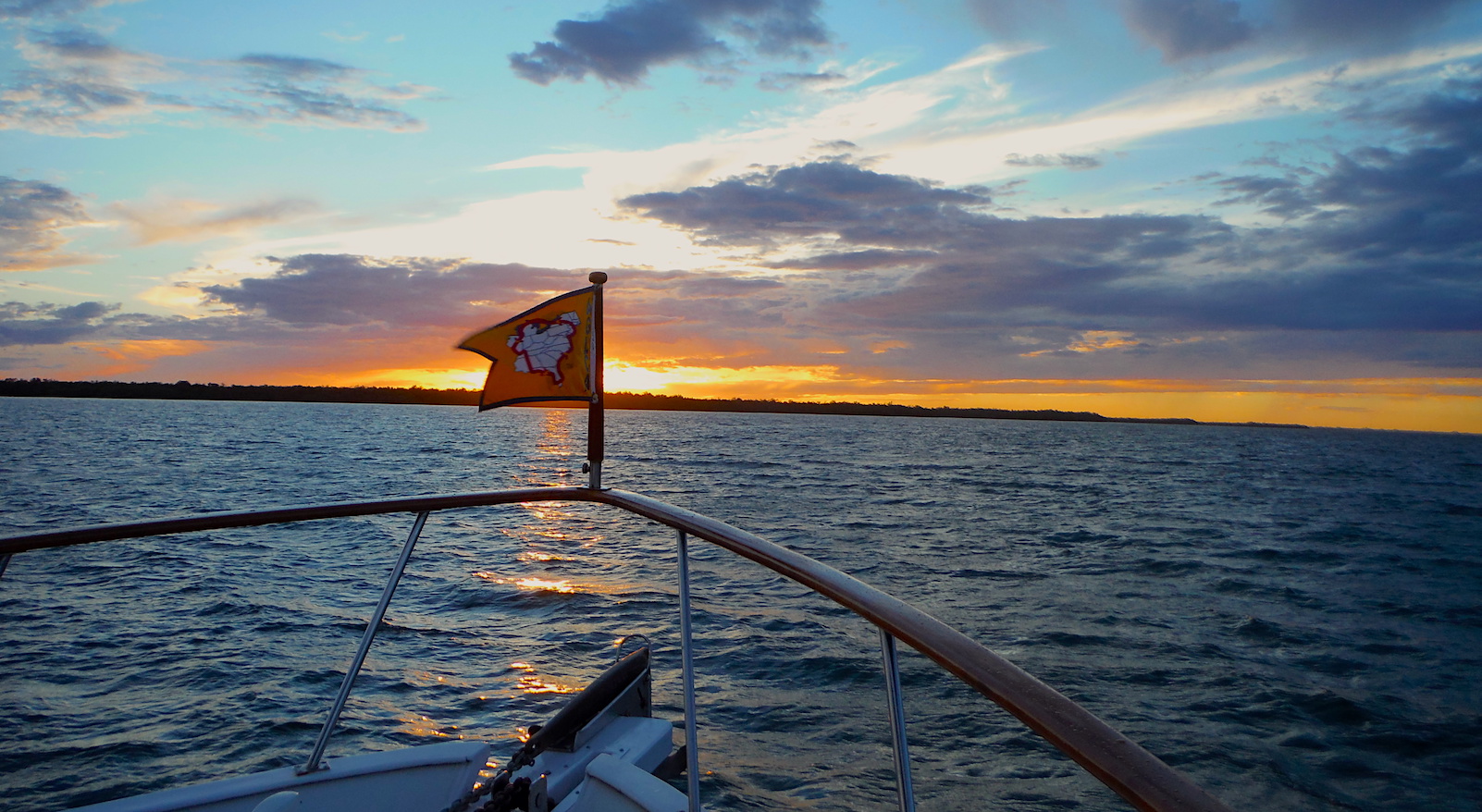 We discovered our old anchor alarm (an app called Drag Queen) didn’t work after the IOS 11 update to our iPhones, so Tom found Anchor Pro. These apps work by allowing you to mark your position when you drop anchor, then set a “swing range” plus a few more feet. (To read more about how these apps work, click anchor alarm .) Well, the wind came up again overnight, and at 1:30 AM, we were awakened by Anchor Pro! We got up and Tom checked everything out. He let out a bit more chain, decided we hadn’t moved much, if at all, and we went back to sleep.

Thursday morning dawned with lighter wind. We had a 40-mile day (about 6 hours in Life’s TraVails) along the coast past Naples to Marco Island. After passing Ybel Point on the southeast end of Sanibel, we had a leg of 30 miles without changing course. This took us as much as 4 miles offshore as we passed alternately large condos and pretty beaches. The water turned beautiful shades of aqua blue. Unfortunately, because the waves were coming almost directly at our starboard side (that’s “right,” for you non-boaters), we had a bit of rolling side to side. But crackers seemed to keep Tom’s stomach quiet and we skipped lunch.

North of Naples, Tom’s trolling line started zinging and Paula’s plans for dinner started changing. He pulled in about a ten to twelve-pound fish, but unfortunately, we found out later according to the app “Fish Verify” it was a “little tunny; edibility: poor.” BBQ for supper instead.

We entered Big Marco Pass and anchored behind green marker 15 where we enjoyed dinner on the aft deck as we watch dolphins feeding as well. 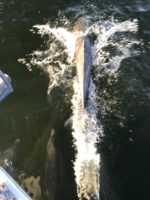 The next morning, lots of boats filed out through the navigational channel at 7:15 AM, but about 10 miles offshore later, there were times when neither land nor boat was in sight. We discussed this would probably have terrified us early on our first Loop. Still in only about 20’ of water, there were hundreds of crab traps which required a keen watch to avoid. Crab pot lines and boat props do not play well together! The seas were much calmer than the day before and we had a pleasurable ride. We even saw 4 big sea turtles along with a few dolphins.

57 miles later, we pulled into Shark River. There was one other boat already anchored there (one we had seen leaving Big Marco Pass just ahead of us that morning). We chose a spot further in because he was still being bounced by waves off the Gulf, and we had a nice anchorage for the night. Dolphins swam by us while we set anchor at 4:00 PM.

We lowered the dinghy and began exploring upriver within 30 minutes. We watched a fisherman hook about a 100# tarpon, the fish breaching several times (while the fisherman whooped and hollered all the while)…but, alas, he got away. We finished our dinghy ride by visiting with John & Karen Swarthout on Sunniva, a Mainship 430. With a similar boat, they knew Kit & Pam Kersch, friends from our first Loop! The boating world sometimes seems so small.

We were without cell service or internet for about 24 hours. A few other boats anchored later in the river and we all enjoyed a calm night. 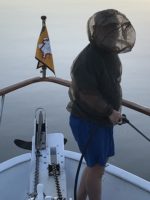 We had been warned about the bugs at sunset and sunrise, and we found out about them in the morning. Wanting to get an early start to our 46-mile day, we got up about 6:30 AM and made departure preparations. The small black biting no-see-ums were horrible and even with long pants and long sleeve shirts, bug spray, and mosquito gear on, they were gnawing their way through us. Even after we were out in the Gulf with all the windows open, there was not enough breeze to get rid of them. Tom let Paula go inside below because they were driving her crazy and seemed to be biting her more. Tom pulled out a big rotating fan to try to blow them away. They continued to bite us for hours. It was enough to make Paula wish we hadn’t anchored there.

The Gulf was calm. It was hard to believe a body of water as big as the Gulf could be so calm. Absolutely flat. We were so blessed with a good 5-day weather window to get to Key West. Skipping fish, dolphins playing on our bow (we saw over 20 during the day), and turtles entertained us through the ride while avoiding the plethora of crab pots. 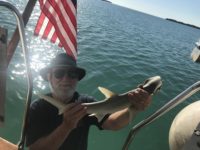 Once at anchor in between some uninhabited islands in the Keys, since trolling hadn’t netted us supper, Tom threw in the line and pulled in a nice mutton snapper and then another kind of snapper that became supper. Every time he threw in his line, he pulled in a fish or got a bite. This included a whole bunch of catfish, 2 baby hammerhead sharks, and other unidentifiable fish.

We lay on the bow under God’s magnificent night sky for a while, enjoying the cool breeze with no other boat or civilization in sight (not that we’re that civilized either).

Sunday morning was dead calm. We casually left our anchorage at 9:45 AM for our final leg to Key West. Reading about our approach to Key West, Paula’s heart stopped for a while when she read there was an 18’ fixed bridge en route to our marina. (Our air draft is 20’ minimum when we lower our antennas.) We were arriving in Key West during prime boating season with reservations to a marina we couldn’t get to!  Fortunately, there was a longer alternative route that went around the connecting island (adding about 45 minutes) and Paula started breathing again.

Again, after a smooth Gulf ride, we arrived at The City Marina at Garrison Bight at 2:15 PM. We had an easy entry at the end of a finger dock. Dockmaster Mark gave Paula clear hand signals as to where we were to go, and she sterned it in, glad there were no other boats close by. 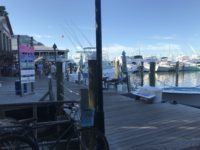 Shortly after, we were on our scooter to the recommended Conch Seafood restaurant where we split Snapper Wellington (yellowtail snapper stuffed with blue crab mix, wrapped in puff pastry and topped with Key Lime hollandaise) served with mashed sweet potatoes, a mix of carrots, green beans, and cauliflower, along with balsamic glazed tomatoes. It was one of the best meals we had had in quite a while!

We walked the docks and made it Mallory Square just in time to join the crowd for sunset. Before returning to the boat, we enjoyed chocolate dipped Key Lime Pie on a Stick from the Key West Key Lime Shoppe. We pinched ourselves…we had the boat in Key West! 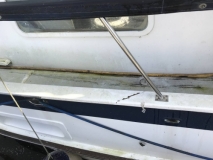 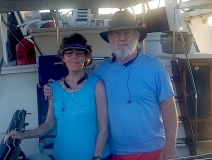 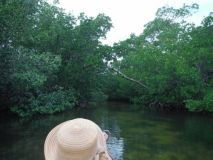 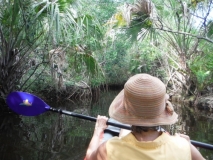 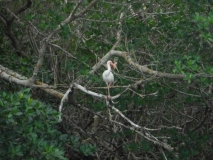 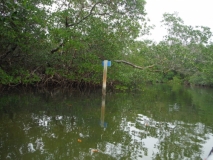 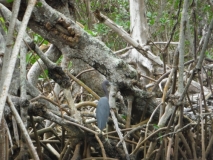 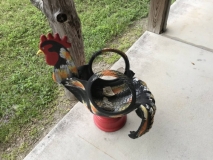 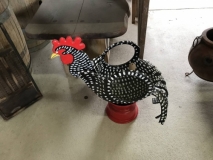 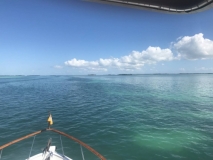 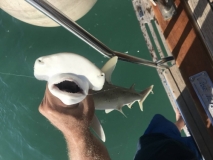 We left the boat because Paula’s knee was swollen and painful. We went home thinking she might have to have surgery, rehab, and be back on the boat in a couple of months.  Unfortunately, she ended up with whole body inflammation issues whose origin was never diagnosed.  It was very discouraging for both of us, but perhaps you could profit by reading what Paula felt God taught her through it all which she shared with our Sunday school class.

An anchor alarm works by alerting you when you have gone beyond a certain perimeter from the anchor. For example, we anchored in 7’ of water and put out about 50’ of chain. (7:1 is a good rule of thumb.) If the winds were to change and the boat swing to the extent of the anchor, that would be a circle a 100’ diameter (not taking the slant angle into consideration, which would shorten that distance a little.) Since the anchor is in the middle, setting the anchor alarm at 60’ will cause the alarm to go off if the anchor dragged 10'.