Home Our Blog End of The Secret Adventure

End of The Secret Adventure

After Mel and Maria’s departure on August 1 from Eagle Harbor, we went with George & Deb to Doc’s Marina Grill for a seafood dinner. Though good, we didn’t think it was worth the price. Food, and especially restaurants, in Washington cost so much more than in Phoenix. Afterward, George, a skilled electrician, helped Tom with some generator/electrical issues while Paula visited with Deb.

Near dusk, we almost got hit by an incoming sailboat. Paula plus 3 other boaters grabbed extra bumpers and helped catch lines. It was a terrible too-fast docking, with the sailboat scarily hitting the dock with his stern. He finally went around to try again and got secured. He needed to learn the adage, “Don’t go any faster than you are willing to hit something!” (Yes, there was damage.)

A more enjoyable thing happened in the morning. George and Betty had a blind dog, Betty, and Paula enjoyed watching Betty retrieve sticks George threw in the park. She was amazing, listening to the sound and finding the stick. She thrilled to the activity.

Tom rewired the generator kill switch as it was only intermittently shutting down the engine. Success. He called the harbormaster to see if we could exceed the 2-night limit due to electrical problems and we were granted permission (for George and Betty too). George helped again with electrical for 4 hours before we took them to dinner. We were grateful for his help before they departed the next day.

We returned to Fisherman’s Terminal in SEA after a 1-hour wait at the lock and were very grateful for a “dock angel” to catch lines for us in the 8+ knot wind. Then Paula decided to scrape the step down to the aft swim step since the rest of the rails looked so good. Tom did lots of miscellaneous small tasks, always making the boat more efficient and better. 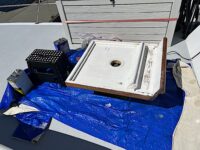 Finally, our first prospective buyers were due to come in 2 days, so there was more spiffing up of The Secret to ready her for showing on August 6. Tom vented the bilge, replaced the lines on the bumpers, painted the inside of the dinghy deck hatch, and replaced the window locks, while Paula cleaned. We moved some excess stuff to our neighbor’s aft deck and at 5:00 PM (and after weeks of waiting), got a text saying they were not coming, as they decided the DeFever hull style did not suit them. Really??? It felt like another kick in the gut as they were the only ones who had expressed an interest in the boat.

Another factor in selling a boat in the PNW was the shortage of slips. Often the first question we got was, “Is the slip transferable?” Some slip waiting lists were as long as several years. However, if you had a slip all lined up and liveaboards were allowed, living on a boat could be cheaper than housing in Seattle. Several people who inquired wanted to live on The Secret, and though our slip at Fisherman’s Terminal was transferable, liveaboards were not allowed.

What next? Tom videoed the boat for a YouTube post and then painted the black window molding of the dinghy deck hatch door; it looked awesome! More painting kept improving The Secret’s looks. Meanwhile, Paula researched cruising destinations. 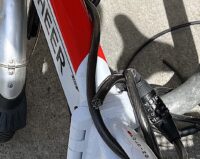 On August 8, while shopping at Fred Meyers in broad daylight on a Sunday afternoon, someone cut our heavy-duty bike cable and stole Paula’s Ancheer e-bike! Tom’s was still sitting there. He biked our cold stuff home (with spillage along the way when his bike basket broke) while Paula walked. Not a great day!

With still no calls of interest on the boat, we decided to call Jaime from Dock Street Brokers (the broker through whom we bought the boat) to see if he would be interested in listing the boat and invited him over to see it. He came by and was amazed at how different the boat was from when he sold it to us, saying it looked like “a different boat” and suggested an asking price of what we paid for it plus what we put into it. He gave us a very good deal (half what most brokers charge) with a non-exclusive listing so we could continue to market it ourselves as well.

It was blackberry picking time! Tom brought home 2 containers of beautiful berries and we made blackberry ice cream onboard. Bliss. 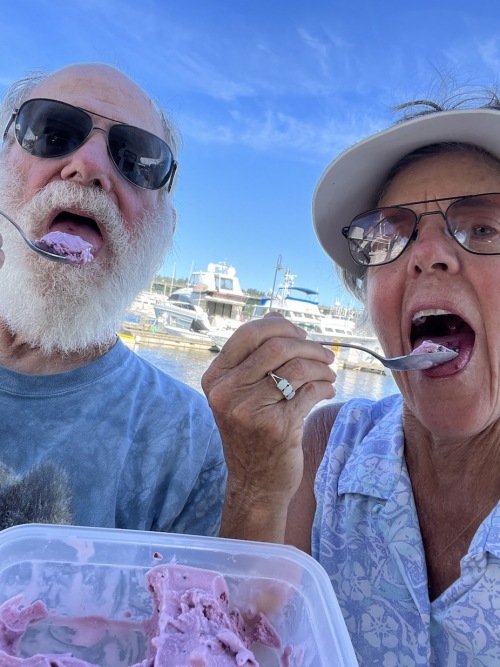 Due to a suggestion from a fellow boater, Tom posted an ad on Craigslist for The Secret. We thought, “Who would buy a big-ticket item like this on Craigslist?” We quickly found out! The same day we posted, we had our first inquiry. A second response resulted in a showing 2 days later, a third 2 days after that, and another the following day. Each had good things to say about the boat. On the 4th day, we had 4 showings at 2-hour intervals, one of which resulted in an offer! We thanked all our friends for their prayers and were encouraged again. Wow! What a turnaround!

But…another gut punch. The following day, the offer was rescinded, saying he would want to repaint the boat and it would be too expensive. This roller coaster ride of boat-selling takes a toll on the emotions, even though one tries not to get wrapped up in it all. We re-contacted the others who came that day, which netted another offer on August 15. But again, trying not to let our emotions run wild, we decided whether or not this one came through, we had a little more cruising to do before letting her go. 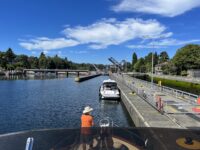 So, it was out through the Ballard lock once more, headed north. We anchored and dinghied to the dock in Kingston (they charged us $10 and wouldn’t even let us use their bathroom; rip off)! We walked the very small town, then took Whisper for her first beach experience. She loved it! She got the zoomies, racing around, digging, and then lying in the sand. What a blast. (Click on the picture for a short video.) 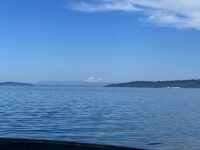 In the morning, we had a beautiful cruise from the flybridge from Kingston to Port Ludlow. We passed pretty curving sounds and lovely houses. We reminisced about what it would be like to not own a boat and be on the water; it made Paula sad. There is such peace on a lovely cruising day on the water – the stillness, the relaxation, the views away from the noise. We would surely miss it. Once in Port Ludlow, we walked to town along a lovely, wooded trail next to the road then on to a waterfall. 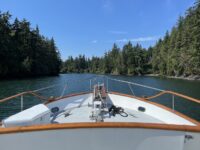 Whisper enjoyed another beach walk before our very short cruise to a tiny entrance to a round bay anchorage called Mats Mats Bay where we anchored with about 10 other boats, surrounded by houses.  After a light rain cleared in the morning, we cruised to Port Townsend Boat Haven, our destination for this northbound trip, home of the largest wooden boat festival in North America.  We walked to town for pizza and showed the boat to a dock-wandering couple upon our return. 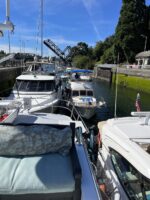 Whisper enjoyed another beach walk in the morning. On August 21, it was time to return to Seattle. Though cool, we enjoyed another drive from the flybridge, realizing these times were coming to an end. It took over 2 hours to get through the Ballard Lock with 28 boats in line! (Yep, it was a Sunday.) But, if the purchase went through, that could be our last time through the lock.

August 24 – survey day arrived. At 10:00, the engine surveyor and prospective buyers arrived. 30 minutes later, the surveyor arrived. We cruised to CRS for the haulout and pressure wash before returning to Fisherman’s Terminal where oil samples were taken, followed by lunch on the boat with Kevin and Bridget Warwick, the buyers. We thought the whole thing could hardly have gone better and they were pleased as well.

Now the wait. It would take at least 10 days for the oil sample results. (It used to take 3; they blamed it on COVID, of course.) Though Paula would have liked a few more sunsets from anchorages, Tom decided it best not to take the boat out again, with things proceeding well at that point. We decided to wait out the completion of the survey from Phoenix and finally got a flight home 4 days later, on August 29.

Though the final papers were not yet signed, we decided to return to Seattle on September 15 to pack up our personal stuff to drive it home. Even if the sale fell through (though we thought it extremely unlikely at that point…though we know it’s never “sold” until the money is in the bank), we knew our cruising days with The Secret were over.

The packing went better than we anticipated. We arrived at the boat at 6:00 PM on September 15, went to bed at 10:00 PM, and by 12:20 the next day, we walked away from the boat for what we thought would be our final time. There was hardly an inch of space in the rented SUV. 1398 miles and 20.5 hours later, we arrived home! 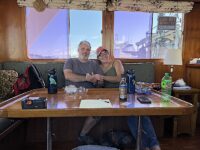 The sale was final on September 24, the Warwicks owned The Secret, changed the name to Curious Nature, and looked forward to making memories with their 3 children for many years. We were all incredibly happy and we wish them many wonderful fun times ahead.

For many reasons, we enjoyed our cruising on the East Coast and the Great Loop more than our West Coast cruising. COVID was a big reason, as well as more work on The Secret than we anticipated at purchase. But we were very pleased with bringing a good boat back from neglect to beauty and were pleased with our accomplishments. Had we been able to take her to Alaska as originally planned (COVID, you know), we think it would have been a totally different story.

So, what is next? Cruising our National Parks in a “land yacht” (RV). We’ve started looking.

P.S. We think this will be the end of 8 years of our boat adventure blogging and we don’t plan to RV blog. We do think we will post pictures of touring our National Parks.  So… stay signed up if you want to see those in the future.