Home Our Blog Beginning of a New Season

Beginning of a New Season 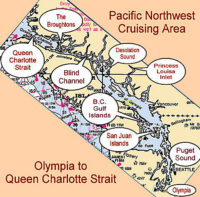 Exactly 1 week after the money from the sale of Life’s TraVails was in the bank, with our next intention to start looking at RVs to begin touring our National Parks…surprise…we made an offer on a boat in Seattle. We had always wanted to cruise the San Juan Islands and Alaska’s Inside Passage. And Paula knew her boating fun bucket was not full yet. Tom decided he would like a newer, smaller boat with less work required. But the Ranger Tug 31 we had looked at in FL was a huge disappointment.

We looked at 2 DeFever 44’s (just like Life’s TraVails, only a few years newer) and a 2010 37’ Nordic Tug. We thought another DeFever 44 would be so easy – we’d know exactly where everything went and how to drive it. But the Nordic Tug was very impressive and smaller and newer (and a lot more expensive)! Paula told Tom the decision was his.

There was one other DeFever, the brand we had come to love over the last 6 and a half years, on the market in Seattle that was 5 years older (1980) and 5 feet longer (49 feet) than Life’s TraVails. (What happened to newer and smaller?) Precisely, it was a DeFever 49 RPH (Raised Pilot House), some say a perfect boat for cruising the Pacific Northwest (PNW). Residing in Phoenix for over 20 years has made us wimps when it comes to cold weather. The raised pilothouse is a fully-enclosed driving station up 4 steps from the main level, with great visibility (unlike Life’s TraVails indoor driving station on the main level. We only drove from there twice the whole time we owned it.) Then there is also a flybridge, similar to Life’s TraVails, up another 2 levels from which we could drive on really nice days if we preferred.

Unfortunately, the husband of the couple who owned the boat had died 2 years previously, and the boat had sat untouched during that time. There were cobwebs and spiders everywhere, inside and out…but we thought it had a lot of potential. Oh well, older and bigger. Wasn’t that what we said we wanted?

Tom said Paula was too small to drive it. Paula said, “I’ll show you!” Actually, Paula said she didn’t think it was really a boat – it was more like a house! She literally got lost while we were looking at it. She knew the staterooms were downstairs, but she couldn’t find the stairs!!! (She forgot she had to go up a level to the PH before she could go down 2 levels to the staterooms.)

The name, you ask? It’s The Secret. Will we change it? We assumed we would name it Life’s TraVails II, but Paula sort of liked the name. First, there were likely no boaters on the West Coast who would have ever heard of Life’s TraVails, so that wouldn’t matter. And actually, we fleetingly thought, “Maybe we won’t tell our non-boating friends we bought another boat. They’ll think we’re crazy.” Next, when a boating friend heard the name, her first thought was of Jesus, the “secret” who revealed God to us. Luke 8:10 says, “He said, “The knowledge of the secrets of the kingdom of God has been given to you, but to others I speak in parables, so that, “‘though seeing, they may not see; though hearing, they may not understand.’” And later I learned from another friend that her father’s favorite song was, It Is No Secret.

You see, Jesus is a secret to many people. It was hard for us to understand who God was, so God came to earth in a physical body similar to ours in the form of Jesus so we could see Him, learn from Him, and know who God is. Then He, being perfect Himself, was crucified, taking on our sins for which we could never pay, to allow us (if we accept His sacrifice) to one day be with God in heaven. Having put our trust in Jesus, we know He is the “secret” to living this life abundantly and the life to come! Praise God! Accept His sacrifice for your sins, tell Him you love Him, and He’ll be no “secret” to you either.

So, exactly one week after Life’s TraVails was sold, we made an offer (conditional on a survey and sea trial) on our next boat that was accepted by the owner. And we were over-the-moon excited! The boat was going to take a lot of “sweat equity” to clean up, organize, and “make ours,” but having done it once before, we knew what was before us. (Secret needed much more work but we believed she had good bones.)

But then it happened. We went back to the boat for a second look and found some dry rot on the bottom of the dinghy deck (see wrinkled paint on picture to left). We asked the broker to have someone take a look at it and give us a guesstimate on the repairs. It would only be a guess because there was no telling what he would find once he opened up the area to see just how extensive the damage was. The marine repair guy, who happens to own a wooden DeFever 57’, took a look and delivered the bad news. There was much more damage than we had seen. So, we went from being over-the-moon to deflated in just 2 days. Once the full review was done though, we decided to follow through conditional upon the owner fixing the dry rot.

On September 24, the survey and sea trial were successfully completed, and we sealed the deal.

But then…the survey report took 22 days to be received, the owner got cold feet about having to fix the dry rot, and 2 days before we were to fly to Seattle to sign the papers, she reneged. We felt like we had been kicked in the gut.  But the broker helped work through the problem, and we both agreed to a lesser amount in payment for the boat “as was.” The papers were finally signed on October 22nd, and we got the key.

We plan to leave it in Seattle (it’s only about 30 minutes from the Sea-Tac Airport) and work through the winter to get Secret ready to cruise again. We learned the cruising season is May through September (with the shoulder season including April and October). Being from Phoenix and loving the sun, Paula was doubtful how she was going to manage overcast skies and rain. We were ecstatic to learn the PNW has a “dry season!” We’re told there’s really no weather from May through September. (Please don’t tell us if we’ve been lied to!)

We hope you’re ready to come along with us on this new season of adventure and more of the Vail’s boating saga! Beautiful pictures are sure to abound. 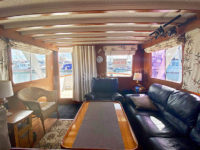 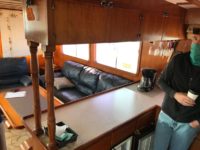 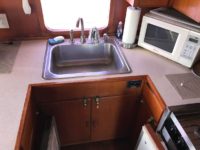 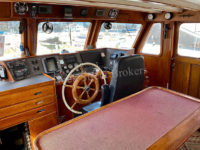 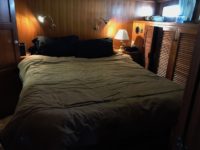 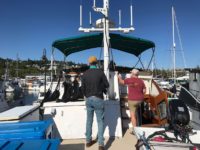 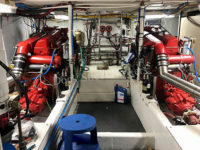