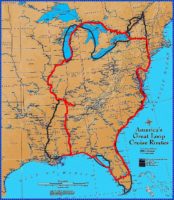 The Great Loop is a 5,000 mile route around the eastern United States.  The map at the left (click to enlarge) shows the basic loop.  Normally the loop is traveled in a counter-clockwise direction, with winters spent in the south and summers in the north.

The black line shows the potential routes along the loop. The red line showed the route we took on our first loop which we completed in November of 2016.