Home About Us About Tom & Paula 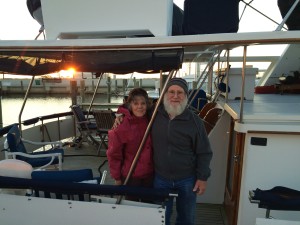 Tom & Paula the morning they started the Great Loop

Paula is a native North Carolinian and was a long-time resident of the Burlington/Elon area. She graduated from UNC, is an ex-gymnast and owned a gymnastics school in Burlington. An avid tennis player and marathon runner, she, having become a professional pilot, was about to hit one of those ‘big’ birthdays, the kind women don’t like to see coming. So in July of ‘94, under the threat of one of those black balloon birthday bashes, she gathered up 3 of her lady friends and got out of town.

Tom was born and raised in the Los Angeles area and moved up the corporate ladder until he was managing the Corporate Data Center for a Fortune 500 company. Most of his leisure time was spent in the outdoors, biking, camping, skiing or boating. In 1980, he took a vacation to the Grand Canyon that changed his life. Three years later he quit his job and moved to Arizona.

His vacation led him to a career as a professional guide running rafts through the Grand Canyon. Her get-away led her to the Grand Canyon for a white-water rafting adventure, and there, their love story began. It wasn’t love-at-first-sight, in fact, one of the first things she said to one of her friends was, “I don’t think he likes me.” But by the second night, sparks were beginning to kindle into what became a serious fire. Long hours were spent under the starlit nights talking about everything under the sun.

The miracle of all this is that if they had not been “trapped” in the Grand Canyon, they would not have given each other much of a second thought. She had been single for all her life, and had very specific ideas about her “perfect mate.” (Actually, she had decided she’d probably be single for life.) He had to be a Christian, preferably never married before, athletic, have a good sense of humor, and it was just assumed he would probably be in the corporate lifestyle. He, on the other hand, thought she was way too religious, and most definitely was GUD (geographically undesirable). But the character of a week-long whitewater rafting trip, in one of the most beautiful settings in America, provided an opportunity for them to get down to their basic values and who they really were. And during that week, she saw a lot she liked in him and he in her.

Well, to make a long story short, within 5 months he had accepted Christ into his life while on a climbing trip in Pakistan and moved to Gibsonville, NC where they continued to date in a more conventional pattern. On October 1, 1995, Paula Sue Kilpatrick became Paula Sue Vail. While not off flying an airplane for American Airlines, she lives in Phoenix with her husband Tom.

Shortly after their marriage, they started Canyon Ministries offering Christ-centered rafting trips through the Grand Canyon. Over the next 15 years the ministry grew from one trip a year to a dozen or more.  in 2013, they passed the helm over to the next generation and Canyon Ministries is still going strong, now offering rim tours of the canyon as well.

In their leisure time, they have charted sailboats in a number of places around the world. They bought Life’s TraVails (formally Escapade) in early 2014 to start their dream of doing the Great Loop.